​– Africa’s minimal integration in world trade is reflected in the contours of its maritime sector yet this portends an enormous opportunity for the world’s youngest and second-most populous continent.

Africa relies heavily on ships and ports to service its intercontinental trade. While it accounts for approximately 2.7% of global trade by value, the continent contributes higher shares to global seaborne trade – 7% and 5% of maritime exports and imports by volume, respectively. While one-third of African countries are landlocked, maritime transport remains the main gateway to the global marketplace.

Maritime trade in Africa is shaped by the continent’s trade concentration and limited diversification. Accordingly, 40% of goods exported by sea in 2017 comprised of crude oil, while over two-thirds of imports were accounted for by dry cargoes (dry bulks and containerized goods) and close to 20% of imports were made up of petroleum products and gas.

The European Union remains Africa’s major trading partner although its share of trade has declined from about half in 1995 to one-third in 2017. In recent years, the share of trade with the United States of America has fallen while trade with China has increased: China, and Asia in general, have incrementally cut into the EU and US share of African trade. This is opening new opportunities for the continent both as a consumer market as well as a potential manufacturing region, for example, as shown by growing textile and garment manufacturing activity in Ethiopia.

Africa’s ports account for 4% of global containerized trade volume, much of which comprises imports of manufactured goods. Africa’s shipping and ports do not always match global trends and standards. Apart from four container terminals in Morocco, Egypt and South Africa, no other African port was featured in the 2016 list of Top 100 global container ports.


Demand and supply patterns
By diversifying their economies and enabling greater integration into regional and global value chains, Africa can improve its containerized trade and port traffic volumes and emerge as an exporter of containerized goods. For this to happen, however, trade policy and regional integration initiatives such as the African Continental Free Trade Agreement (AfCFTA) will not be enough.

Africa’s container ports and hinterland transport networks need to support these efforts by upgrading infrastructure and services, and improving performance, to match international standards. This entails, among other things, enhancing productivity levels: on average, crane productivity is around 20 moves per crane per hour in West Africa, 25 to 30 in South Africa, and 35 to 40 in Asia.

Shipping connectivity, which significantly influences transport cost levels, is below the global average in Africa. African countries shipping connectivity is strongly influenced by their geography. The best-connected countries are those at the continent’s corners, where international shipping routes connect to hub ports, notably in Morocco, Egypt and South Africa. They are followed by sub-regional load centres, notably Djibouti, Togo and Mauritius (see chart). Combinations of public and private investments, port reforms, and improved transit to connect to neighbouring landlocked countries have helped these countries to become leaders in African container shipping connectivity.

Being a significant user and importer of maritime transport services, Africa has for many years sought to increase its participation in the supply of shipping services. This has yet to be achieved, however, as the continent’s ownership of the world fleet is limited, with no African country among the Top 35 ship-owning nations in 2017. This is also evident when considering nationally flagged fleets. Only Liberia makes the list of top flag States, ranking third globally after Panama and Marshall Islands regarding nationally flagged tonnage.

Africa’s maritime transport demand and supply patterns underscore the potential of African countries both as users and providers of maritime transport services. They can do this by leveraging growth prospects and building on comparative advantages like abundant low-cost labour and long coasts to house maritime business industries.

While many challenges constrain the continent’s ability to fully take its place in the global economic arena, several factors on the upside suggest that Africa is a dormant giant. Factors supporting Africa in this journey include robust economic growth, a demographic dividend, resources, growing investment and financing commitments relating to transport infrastructure, including by China.

UNCTAD supports Africa in these endeavours with several flagship programmes. These include port management, trade facilitation and sustainable freight transport technical assistance programmes, as well as close collaboration with the African Union towards achieving the AfCFTA. UNCTAD also actively supports customs reforms with its ASYCUDA programme, which is implemented in most African countries.

A portfolio of measures involving targeted interventions by national, regional and international players that align with the Sustainable Development Goals and mainstream the three dimensions of sustainable development as applied to transport and trade facilitation are required to help Africa fulfil its potential. These include:

• Preparing African ports to accommodate larger vessels through dredging for water depth and ensuring adequate cargo handling equipment is in place.
• Improving access to the hinterland and landlocked countries by multimodal transport and transport corridor approaches and building inland transport infrastructure.
• Making use of relevant technologies and digital solutions to facilitate transport and trade, cutting inefficiencies, improving processes and enhancing transparency, and promoting security and resilience of transport systems.
• Enhancing transport connectivity either on the sea or land side to reduce transport costs and improve African countries’ position in the global shipping networks. This also must encompass enabling soft infrastructure in support of transit transport and trade facilitation by harmonizing transport regulation, including road and rail transport.
• Encouraging greater participation in maritime business by promoting maritime clusters where shipping and port activities can boost related services sectors, including in the context of the Blue Economy. 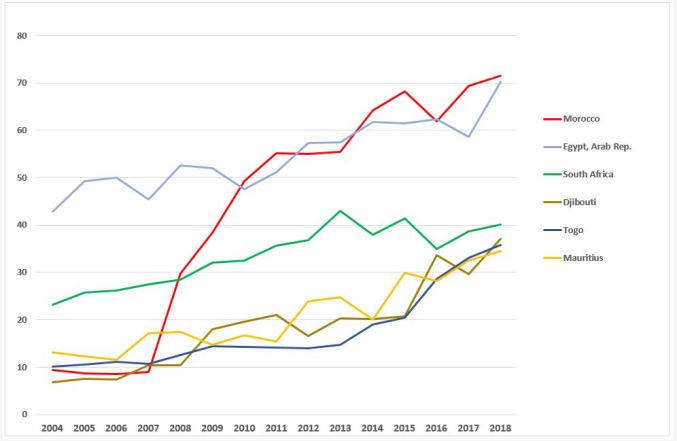 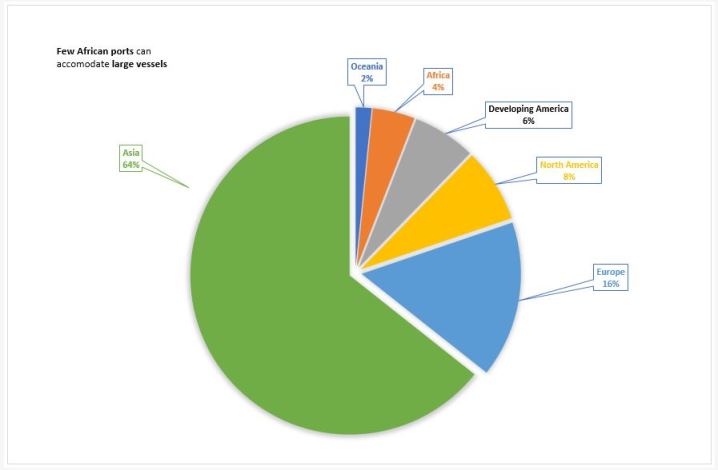 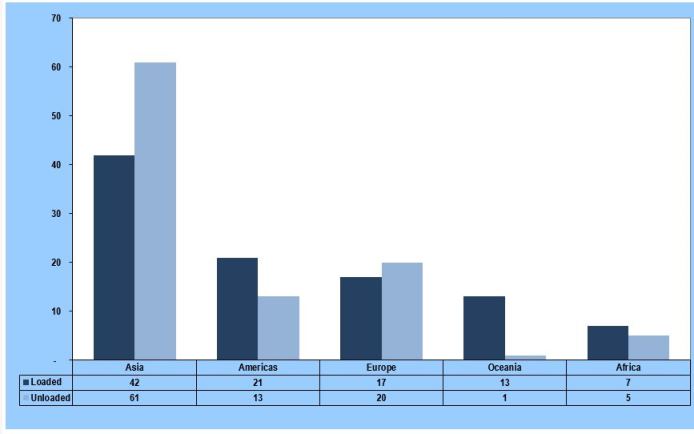