​Small European countries top the ranking of 130 economies according to their readiness for business-to-consumer (B2C) e-commerce, a new UNCTAD study shows. According to a new UNCTAD B2C E-commerce Index included in the study, the highest e-commerce readiness is found in Luxembourg, Norway and Finland.

Among developing and emerging economies, the front-runners are all in East Asia, namely the Republic of Korea, Hong Kong (China) and Singapore (see table). Meanwhile, in terms of actual levels of online shopping, countries with large populations – such as Brazil, China and the Russian Federation – are performing better than predicted, suggesting that large markets facilitate e-commerce.

The Information Economy Report 20151,  subtitled “Unlocking the Potential of E-commerce for Developing Countries”, was released on 24 March. Its B2C E-commerce Index draws on data on Internet use, secure servers, credit card penetration and postal delivery. Assessing e commerce readiness can serve as a first step towards formulating a national e-commerce strategy.

The Index allows countries to identify their relative strengths and weaknesses. For example, in Latin America and the Caribbean and in Asia and Oceania, extending postal home delivery is particularly important. In Africa, e-commerce readiness is hampered especially by low Internet penetration levels.

“As the digital economy expands and more business activities are affected, it becomes more important for Governments to consider policies that can help to harness e-commerce for sustainable development,” UNCTAD Secretary-General Mukhisa Kituyi said.

Global e-commerce is expanding and evolving

Global B2C e-commerce is valued at about $1.2 trillion. While considerably smaller than business-to-business (B2B) e-commerce, valued at more than $15 trillion, this segment is growing faster, especially in Asia and Africa. This area also offers high potential for growth of e-commerce in developing countries.

Developing and transition economies are expected to account for almost 40 per cent of global B2C e commerce by 2018, while the share of developed countries is set to fall from more than 70 per cent to about 60 per cent, according to market estimates. China has emerged as the largest global market for B2C e-commerce, measured both by online buyers and by revenue. Between 2013 and 2018, the share of the Asia and Oceania region in global B2C e-commerce is expected to surge from 28 per cent to 37 per cent, while that of the Middle East and Africa is set to grow slightly from 2.2 per cent to 2.5 per cent.

The extent to which people buy online still varies greatly. The share of individuals who have made an online purchase was for example only 2 per cent in Mexico and Thailand, and more than 60 per cent in some developed countries. Unlike social networking, where activity rates are relatively high among developing countries, the share of Internet users who buy online is generally lower there than in developed countries (see figure). This may reflect limited purchasing power and other mitigating factors such as a lack of trust, limited shopping options and poor delivery services.

The report highlights that developing countries as a group are assuming a more prominent role as both buyers and sellers of goods and services online. Meanwhile, increased reliance on e-commerce generates significant gains for consumers and productivity gains for enterprises selling over the Internet.

Greater opportunities for developing countries to engage in e-commerce

The UNCTAD report notes that the scope for developing countries to participate in and benefit from e commerce is expanding. First, connectivity has improved, with widespread uptake of mobile telephones, social media and rising levels of Internet use. Second, new e-commerce applications, platforms and payment solutions are making it easier to engage in e-commerce. Third, local e companies with e-commerce services tailored to local demands are rapidly appearing in developing countries, including in least developed countries.

For example, in Bangladesh and Cambodia, new e-commerce sites are targeting the domestic market, enabling consumers to browse and order products online. In sub-Saharan Africa, various solutions have been adapted to facilitate commerce over feature phones, and many gateways have emerged that can facilitate payment for e-commerce via mobile phones.

At the same time, asymmetric access to major market places and e-commerce platforms may accentuate existing imbalances in e-commerce trade. Merchants in many developing countries do not enjoy equal access to these market places. Data from the Universal Postal Union on cross-border postal traffic of small packets, parcels and packages also show that while developed countries, and Asia and Oceania, run significant trade surpluses, Latin America and transition economies import much more than they export.

In order to unlock the potential of e-commerce, the UNCTAD report calls for policies that can help to harness e-commerce for sustainable development. Key policy areas include the development of information and communications technology infrastructure, logistics and trade facilitation, the legal and regulatory environment (UNCTAD/PRESS/PR/2015/4), e-payments, and platform and skills development in combination with an enabling international environment.

International dialogue and cooperation are also crucial to promote the smooth exchange of e commerce while at the same time spreading benefits of e-commerce more widely. Special attention may need to be given to international trade rules, taxation and capacity-building. 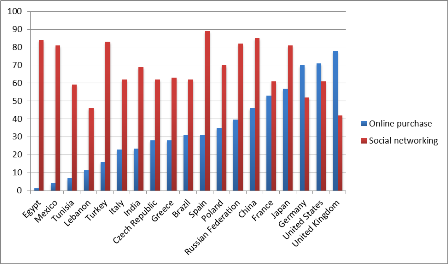