​In 2017, foreign direct investment (FDI) flows to the transition economies of South-East Europe, the Commonwealth of Independent States (CIS) and Georgia declined by 27%, to $47 billion, the second-lowest level since 2005, data from UNCTAD’s World Investment Report 2018 reveals.

“Prospects for FDI in transition economies are moderately positive, bolstered by firmer commodity prices and higher macroeconomic growth,” UNCTAD Director of the Division on Investment and Enterprise James Zhan said.

The performance of the two transition subgroups differed substantially: Flows to the CIS and Georgia contracted by 31% to $41 billion after their rebound in 2016, while FDI to South-East Europe recovered by 20% to $5.5 billion after the decline in 2016. The top recipients of foreign direct investment were the Russian Federation, followed by Kazakhstan, Azerbaijan, Serbia and Turkmenistan.

In the Russian Federation, flows dropped by 32% to $25.3 billion, as investment in new projects declined by almost half to $9.7 billion. Natural resources continued to dominate inward FDI in the country: Mining and quarrying accounted for more than 30% of inward FDI flows, followed by trade (20%) and finance (11%). FDI also declined in other large CIS recipient economies, including Azerbaijan (down by 36%), Kazakhstan (down by 43%) and Ukraine (down by 33%).

In South-East Europe, inward FDI was lifted by robust GDP growth, support for private sector job creation and growing cooperation with the European Union. In Serbia, the largest economy of the sub-region, foreign investment grew by 22% to $2.9 billion. Inflows to the smallest economy of the sub-region, Montenegro, more than doubled to $546 million. In Bosnia and Herzegovina, FDI inflows grew by 40% to $425 million, and in Albania by 2% to $1.1 billion.

China is becoming a major source of inward FDI in transition economies. Its FDI stock held in the region increased from $8 billion in 2011 to $23 billion in 2016, making it the fourth largest source country.
In 2017, FDI outflows from economies in transition recovered by 59%, to $40 billion, after being dragged down by the recession in 2014–2016. A handful of economies still account for most FDI outflows, and the Russian Federation alone is responsible for 90% of the regional total. The country’s outflows rose by 34%, to $36 billion, on the back of large mergers and acquisitions (M&A) activity.

FDI inflows to the region are expected to rise to about $55 billion, supported by better prospects for natural resource prices and improving macroeconomic stability in various key economies of the region (including the Russian Federation). In the medium term, the firmness and structural diversification of announced greenfield projects could lead to a rise in manufacturing FDI, given the region’s human resources assets (particularly trained engineering personnel) and technological expertise. 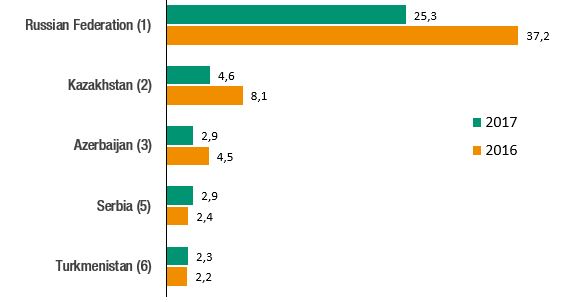 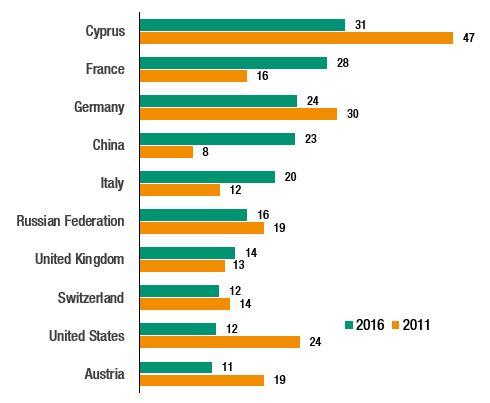