Reliable statistical information is indispensable for formulating sound policies and recommendations that may commit countries for many years as they strive to integrate into the world economy and improve the living standards of their citizens.

Whether for research, consultation or technical cooperation, UNCTAD needs reliable and internationally comparable trade, financial and macroeconomic data, covering several decades and for as many countries as possible. 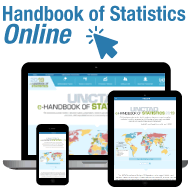 In addition to facilitating the work of the UNCTAD secretariat, the UNCTAD Handbook of Statistics and the UNCTADstat Data Center make internationally comparable sets of data available to policymakers, research specialists, academics, officials from national Governments, representatives of international organizations, journalists, executive managers and members of non-governmental organizations.

This year's edition incorporates several new charts and maps, and includes for the first time new maritime statistics dealing with port performance: tables showing the number of port calls and the time spent by ships in port, sub-divided into eight market segments.

An online version of the handbook or e-handbook is also available.

The e-handbook is a fully interactive tool, including maps and charts, that allow readers to directly access the data from the UNCTADstat Data Center associated with each table or chart.