Not only is network coverage much lower in least developed countries than in the rest of the world, but their mobile data usage is also significantly more expensive, according to an UNCTAD analysis. 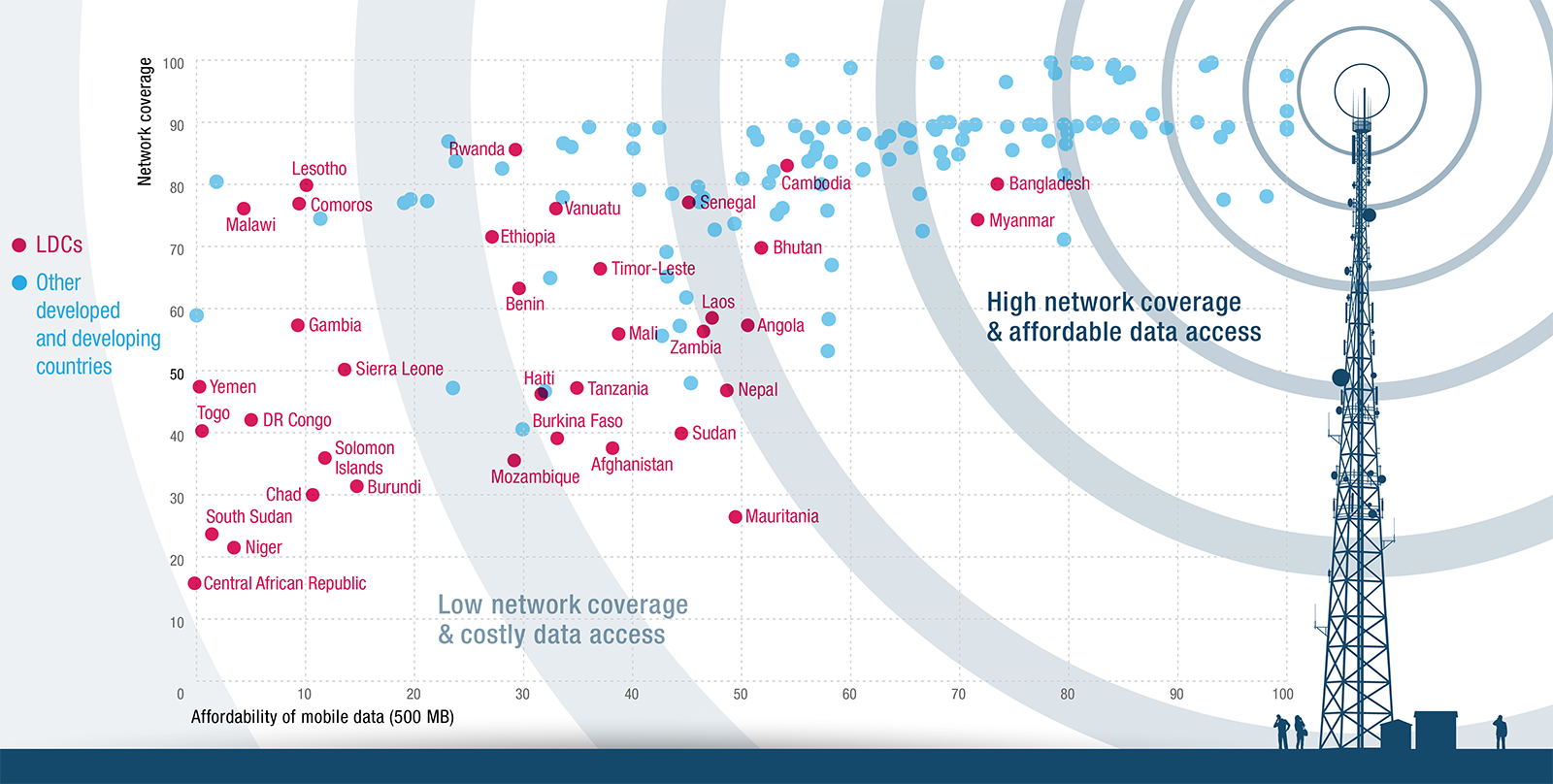 Source: UNCTAD calculations based on data from GSMA Intelligence 2020

Notes: The network coverage indicator is constructed by aggregating normalized data on the percentage of population covered by 2G, 3G, 4G and 5G network. The mobile data affordability indicator is the cost of usage allowance of 500MB as a per cent of monthly GDP per capita; data (in logarithm) are then normalized and “inversed”, so that a higher score means more affordability.

The rapid penetration of mobile phones across the developing world, and the boom in associated internet use, have raised hopes that digital technologies could play a key role in the quest for sustainable development.

While some cautious optimism may be justified, given the scope for lowering communication and transaction costs across a range of activities, simplistic hype around these developments needs to be dispelled.

The above chart, realized with data for 2019, unequivocally shows the extent of the technological divide plaguing economies of least developed countries (LDCs), even in relation to a now-well-established technology such as mobile telephony.

The mobile data affordability indicator average is 30 for LDCs and 63 in the rest of the world.

The median cost of “mobile data and voice low-usage basket” (which is 70 minutes of voice, 20 short messages and 500 megabytes of mobile data allowance) was 9.55% of monthly gross national income per capita (or $7.56) for LDCs in 2020.

This situation perpetuates existing inequalities – rural vs urban, poor vs rich – that intersect with micro-level disparities across gender and ethnicities, among others.

Although the gender gap in internet use has narrowed in recent years, women are still 20% less likely than men to use mobile internet in low- and middle-income countries.

These constraints also explain why the uptake of digital technology for production, rather than consumption purposes, still lags in many LDCs. UNCTAD’s new Productive Capacities Index (PCI) provides further insight into the use of information and communications technologies, an essential component for building, maintaining and using productive capacities.

Against this background, more needs to be done to ensure digital technologies effectively contribute to shared prosperity and support sustainable development in LDCs.

Mobilizing resources to bridge the digital divide, lowering costs of internet access, and supporting investment in digital skills are three critical priorities for LDCs; all of which could be summed up as investing in digital productive capacities.

These policies require, however, financial resources, and at a time when COVID-19 is accelerating digitalization, ensuring LDCs get adequate access to sustainable development finance remains key to building back better.