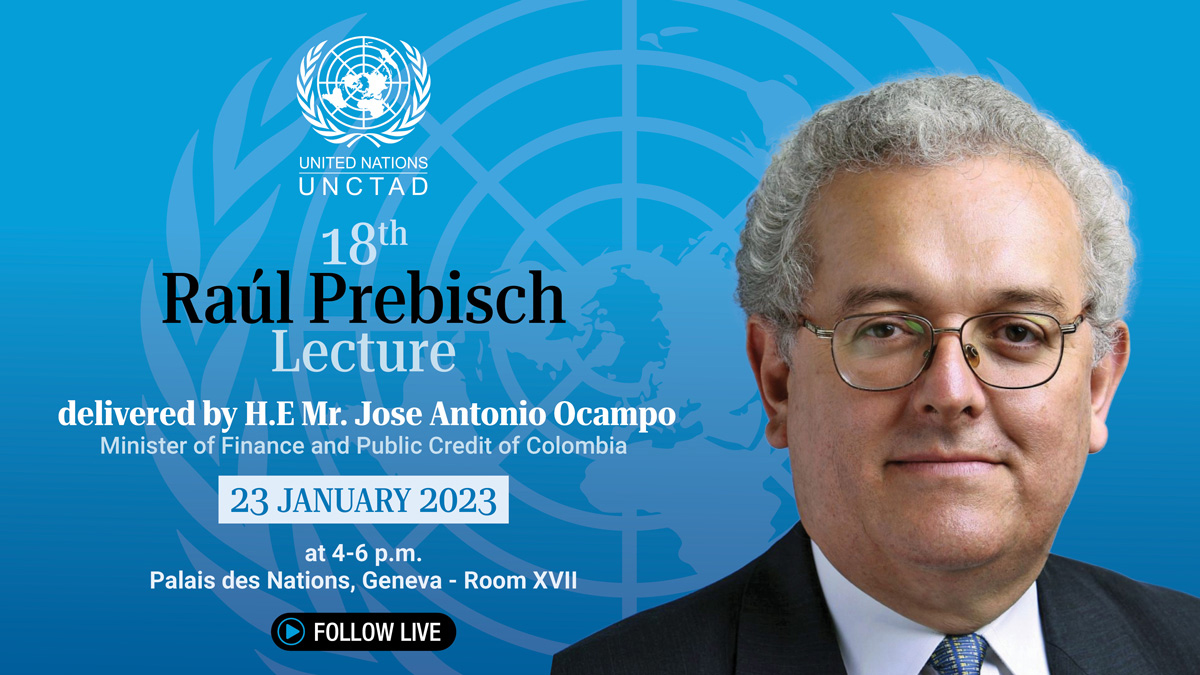 The 18th Raúl Prebisch Lecture was given by Mr. José Antonio Ocampo, Minister of Finance and Public Credit of Colombia.

The 18th Raúl Prebisch Lecture will be delivered by Mr. José Antonio Ocampo, Minister of Finance and Public Credit of Colombia.

The prestigious Raúl Prebisch Lecture is periodically delivered by a prominent thinker or head of state at the United Nations’ European headquarters in Geneva, Switzerland. The lecture, organized by UNCTAD, often tackles trade and development issues, but also covers other topical global concerns.

The lecture series began in 1982, with the inaugural lecture given by its namesake, the late Raúl Prebisch.

Mr. Prebisch (1901-1986) was secretary-general of UNCTAD from 1965 to 1969. Known primarily for his work as a scholar specializing in international and development economics, his greatest contribution to economics is the Prebisch-Singer thesis.

Ocampo was Minister of Finance and Public Credit of Colombia between 1996 and 1997. In this position, he sponsored an IDB forums in Paipa (Colombia). By that time, he also led the greatest public debt bond issue in international markets, achieving the best credit conditions in that moment. Since Colombian public bonds were so demanded, Ocampo decided, along with the investment banking, to launch the first 30-year bond issue.

He has also been Minister of Agriculture, Director of the National Planning Department, and member of the Board of Directors of the Central Bank of Colombia.

At the UN, he introduced some economic and social reforms like the constitution of a permanent committee of experts on international taxation cooperation and the creation of the Financing for Sustainable Development Office.

Ocampo has held some other outstanding positions such as Fedesarrollo’s Director, Rural Mission’s Director, President of the Economic and Social Council of the UN, President of the Independent Commission for the Reform of International Corporate Taxation, and professor at Universidad de los Andes, Nacional de Colombia, and Columbia University in the City of New York, where he was also Co-President of the Policy Dialogue Initiative and member of the Global Thinking Committee.

He has written three books about the Colombian economy, one of them called “Economic History of Colombia”, that became his best seller and that already has 20 printings, the most recent one being in 2015, in partnership with the Economic Culture Fund. This book keeps been widely used as an academic text.

Other works he has published are: “Introduction to the Colombian macroeconomy” and “The economic development of Latin America since the independence”.

He has also been awarded with the Jaume Vicens Vives prize of the Spanish Association of Economic History in 2012, the Leontief Award for the Progress of the Economic Thinking Frontiers in 2009, the