Cotton is grown mainly for its fibre or lint, which is the raw material in cotton textiles.

But, there are other parts of the cotton plant like the stalks, husks, cottonseed and short-staple fibres, and they offer additional income-earning opportunities for cotton farmers and processors – if they have the technologies, supporting policies and know-how to unlock their value.

These cotton by-products represent an opportunity for countries to garner further benefits from cotton production, including: 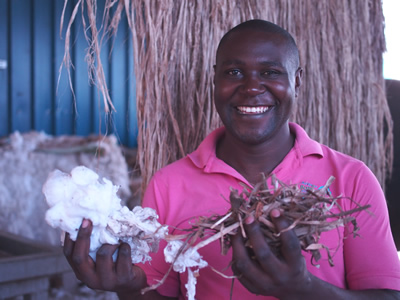 A new project implemented jointly by the WTO, UNCTAD and ITC, with the support of the EIF, will be focusing on eight African LDCs that produce cotton and targeting their use of cotton by-products.

The least developed countries (LDCs) in Africa that produce cotton can realise these benefits. Here’s how.

Over 3.5 million farmers in Africa depend on exports of raw cotton lint, but cotton is more than just lint

Cotton is a predominant cash crop for many African LDCs, providing income to over 3.5 million farmers and their families, and 17% of those lead farmers are women.

Sub-Saharan African countries export more than 90% of the raw cotton lint they produce, earning approximately US$15.5 billion in 2018 for over 1.5 million metric tonnes of lint. 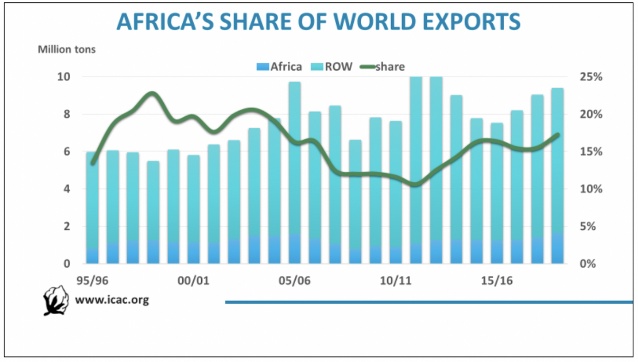 Africa's lint exports are important for the livelihoods of millions of people, but this also underlines the commodity dependence of producing countries. Despite many efforts to enhance local value addition, integrated cotton-to-textile value chains in Africa are currently inactive or absent. As a result, of the 1,272 million metric tonnes of lint produced in French-speaking Africa in 2018, only 19,000 tonnes, or 1.5%, was consumed (i.e. processed) locally, for example.

Given the continued difficulty in reviving textile and apparel industries in Africa, cotton by-products represent potential additional income streams that can improve resilience.

Cotton by-products can be divided into two broad categories: those derived from residues from the ginning and oil milling processes such as linters, hulls, oil and cake; and the products processed from the stalks of the plant, such as briquettes, pellets, mushrooms and particle boards.

Local processing of cottonseed oil and meal in Africa

According to the International Cotton Advisory Committee (ICAC) at a June 2019 workshop on cotton by-products held at the World Trade Organization (WTO), "cottonseed by-products have growing markets and are potentially an important complementary source of revenue for the cotton sector in Africa." 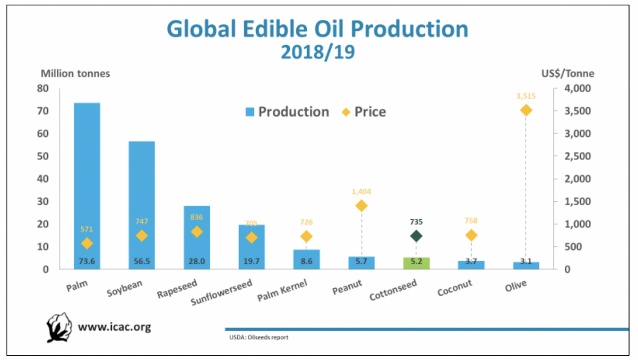 According to the International Trade Centre (ITC) at the 2019 workshop, "The co-product of lint, cottonseed and the other cotton by-products are underutilized, or even neglected, in Africa, despite their numerous and diverse potential uses."

Indeed, Africa produces about 2.5 million tonnes of cottonseed, which is 5.8% of global production. Only 75% of the seed is crushed for oil and seed-meal, and that means that 25% of cottonseed produced in Africa goes unused. The estimated value of that unused seed is about US$237 million, most of which is in West Africa. Mali is an exception in the region, processing all of its cottonseed, as shown in the graph below, presented by the ICAC at the cotton by-products workshop. 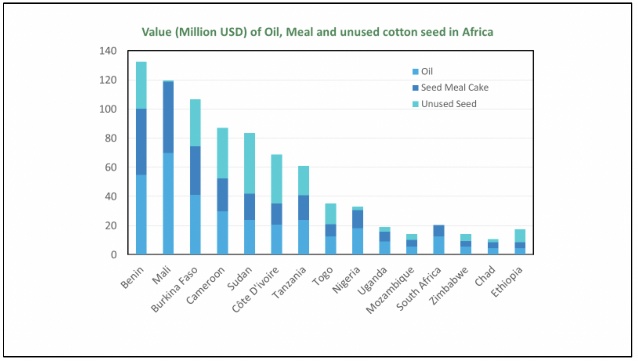 In Africa, after farmers harvest seed cotton, they uproot and destroy the remaining stalks and leaves, often by burning them, to comply with pest management regulations. Stalks represent 80% or more of the cotton plant’s total mass, which is almost entirely wasted in Africa. In other countries, such as India, cotton stalks are compressed into fuel pellets or briquettes, replacing dirtier solid fuels such as charcoal, firewood or coal. Stalks also have other agricultural uses, such as fertilizer or culture substrate for mushrooms.

Farmers can benefit directly from utilizing the stalks they would otherwise burn in their fields, either by selling them to a processor or engaging in small-scale processing themselves.

As well as belonging to the farmers, stalks have the added advantage of being relatively abundant. The following chart, presented by experts from Benin, Burkina Faso, Chad and Mali (the so-called “Cotton 4” countries) at the June 2019 cotton by-products workshop, illustrates the potential raw material supply for cotton by-products, with stalks being the most abundant. 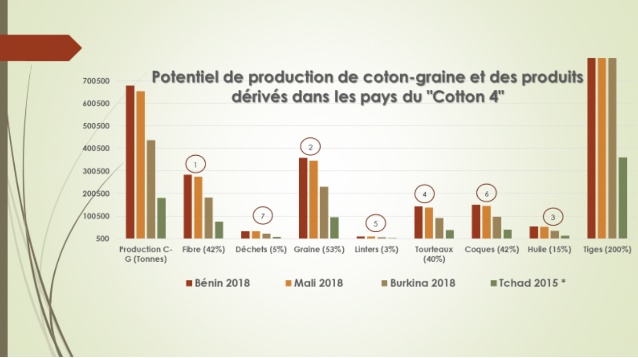 Cotton stalks have attractive properties as a fuel, with high caloric value and low ash content. Densified into briquettes or pellets, stalks can be a smoke-free substitute for dirtier solid fuels. An UNCTAD evaluation in Zambia estimated that a biomass briquetting or pelleting operation – using cotton stalks and other agricultural biomass – could compete in price with charcoal, generate jobs and pay farmers up to US$25 per tonne for their stalks. 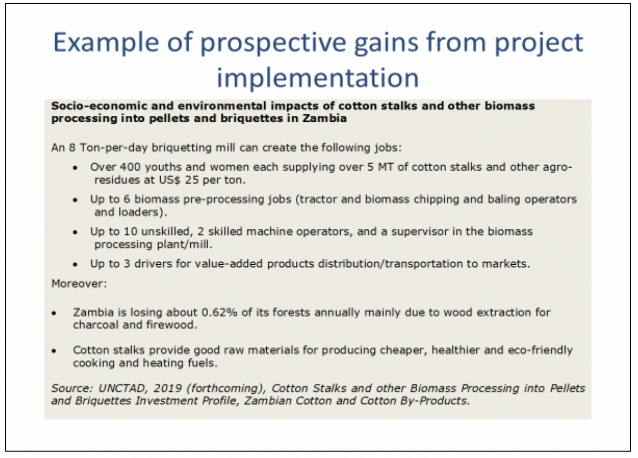 The environmental argument for biomass briquettes and pellets is also compelling. Tanzania, for example, consumes about one million metric tonnes of wood charcoal per year, of which half is in Dar es Salaam. Meanwhile, the country’s cotton harvest yields approximately 500,000 metric tonnes of stalks per year, which are mainly burnt in the field. If some of these stalks were used to produce smoke-free briquettes, it could replace a significant proportion of the wood charcoal consumed in Tanzania, representing an enormous reduction in deforestation, air pollution and smoke-related health problems, according to UNCTAD.

Experiences in other countries, coupled with anecdotal evidence from successful cotton by-products businesses, suggest that results can be achieved in Africa.

Diversification into cotton by-products has the potential to create socio-economic benefits. It can generate parallel activities for income generation and employment for farmers, particularly by equipping them to add value to stalks that they currently burn. 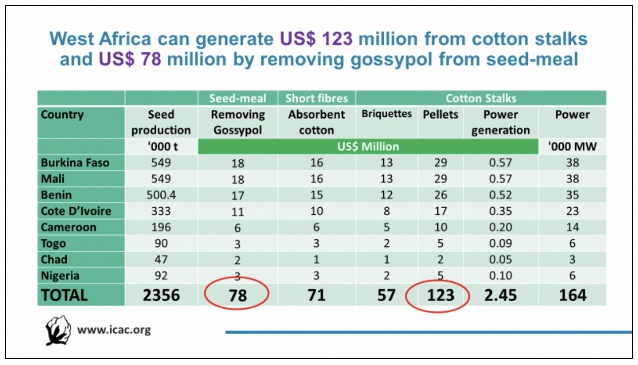 Increasing local processing can increase value addition, create jobs and reduce waste. Policies are required to ensure that farmers benefit, either by direct participation in adding value to their stalks, or indirectly through seed cotton producer prices. Additional income would insulate farmers from the fluctuations of international lint prices, encourage them to grow more cotton and thereby help redress the raw material challenge faced by many value-added processing businesses in Africa.

Activities related to capacity-building, product commercialization and establishment of clear product development strategies are needed to mobilize investments, transfer the necessary technologies and realize the potential of cotton by-products in Africa.