Stable performance of East Asia. FDI inflows to East Asia rose by 3 per cent to $221 billion in 2013. With inflows at $124 billion (figure 1), China again ranked second in the world and narrowed the gap with the United States, the country with the largest global inflows.

China's outflows grew faster than its inflows: during 2013, FDI outflows increased by 15 per cent, to an estimated $101 billion (figure 2). Chinese companies made a number of mega-deals, such as the $15 billion CNOOC-Nexen deal in Canada and the $5 billion Shuanghui-Smithfield deal in the United States – the largest overseas deals undertaken by Chinese firms in the oil and gas and food industries, respectively.

Inflows to the Republic of Korea reached $12 billion, the highest level since the mid-2000s, and those to Taiwan, Province of China rose to $4 billion. Hong Kong, Special Administrative Region of China, – the region's other high-income economy and the second largest FDI recipient in East Asia – experienced only 2 per cent growth in FDI inflows to $77 billion. In March 2014, the Chinese Government decided to move the headquarter of CITIC Group to Hong Kong, Special Administrative Region of China, which is likely to help enhance its competitive advantages for attracting investment from leading transnational companies (TNCs), including those from mainland China.

Slower growth in South-East Asia. Inflows to the Association of Southeast Asian Nations (ASEAN) countries rose by 7 per cent in 2013, to $125 billion. The rapid growth of FDI inflows to the regional grouping, from $47 billion in 2009 to $118 billion in 2012, has now slowed, the report shows.

In Singapore, the largest FDI recipient in South-East Asia, a number of mega-deals took place in 2013, driving FDI inflows to a new record of $64 billion (figure 1). With inflows remaining at around $19 billion in the three years up to 2013, Indonesia's performance in attracting FDI has been stable. In Malaysia, inflows increased by 22 per cent to $12 billion. In Thailand, inflows grew to $13 billion; however, many FDI projects there were shelved due to political instability. FDI performance in ASEAN's low-income economies varied: while inflows to Myanmar increased by 16 per cent to $2.6 billion, those to Cambodia, the Lao People’s Democratic Republic and Viet Nam remained at almost the same level.

Old challenges and new opportunities facing South Asia. In 2013, FDI inflows to South Asia rose by 10 per cent to $36 billion. The subregion's total amount of cross-border M&A sales surged by 70 per cent, while that of recorded greenfield investments dropped by 38 per cent. Outflows from the region slid by nearly three-fourths, to only $2 billion, owing to the prolonged decrease of outflows from India.

India experienced a 17 per cent increase in FDI inflows in 2013, to $28 billion (figure 1), but macroeconomic uncertainties remain a major concern for investors. The opening up of multi-brand retail in 2012 has not generated the results that were expected.

Bangladesh continued to experience growth in FDI inflows, with manufacturing accounting for a major part of inflows and contributing significantly to employment creation. The garment industry has been the major beneficiary, but continues to face serious challenges in labour standards and skill development. In Pakistan, inflows surged to $1.3 billion, and foreign investment is set to grow in industries such as telecommunications.

Regional integration, connectivity and FDI prospects. For some low-income countries in developing Asia, weak infrastructure has long been a major challenge in attracting FDI and promoting industrial development. Today, rising intraregional FDI in infrastructure industries, driven by regional integration efforts and enhanced connectivity between subregions through the establishment of inter-subregional corridors, is likely to accelerate infrastructural build-up and promote economic development. The 10 ASEAN member States and their six free-trade agreement partners have launched negotiations for the Regional Comprehensive Economic Partnership. In 2013, combined FDI inflows to the 16 negotiating members amounted to $343 billion, accounting for 24 per cent of global FDI flows.

In addition, the potential establishment of the Bangladesh-China-India-Myanmar Economic Corridor and the China-Pakistan Economic Corridor are likely to accelerate infrastructural development by attracting foreign investment in related countries.

As economic growth has remained robust and new liberalization measures have been introduced, such as the launch of the China (Shanghai) Pilot Free Trade Zone, East Asia is likely to enjoy an increase of FDI inflows in the near future. The performance of South-East Asia is expected to improve as well. However, rising geopolitical tensions have become an important concern in this part of Asia and may add uncertainties to its investment outlook. 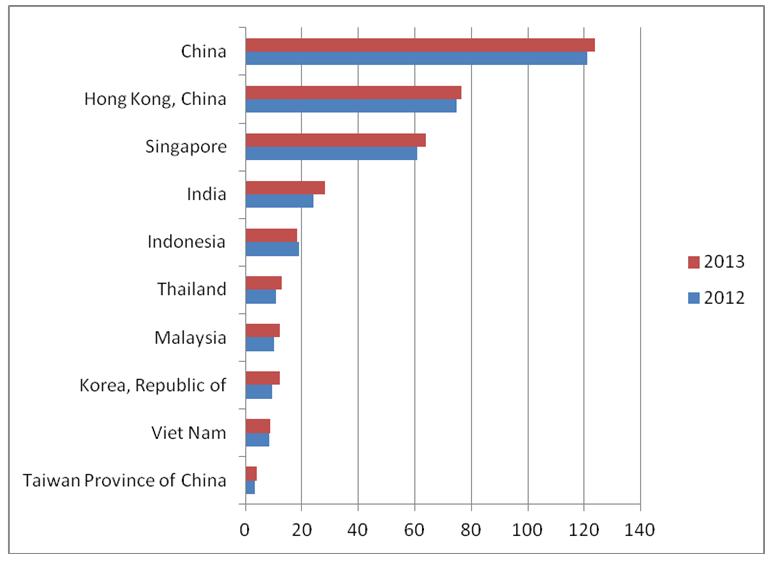 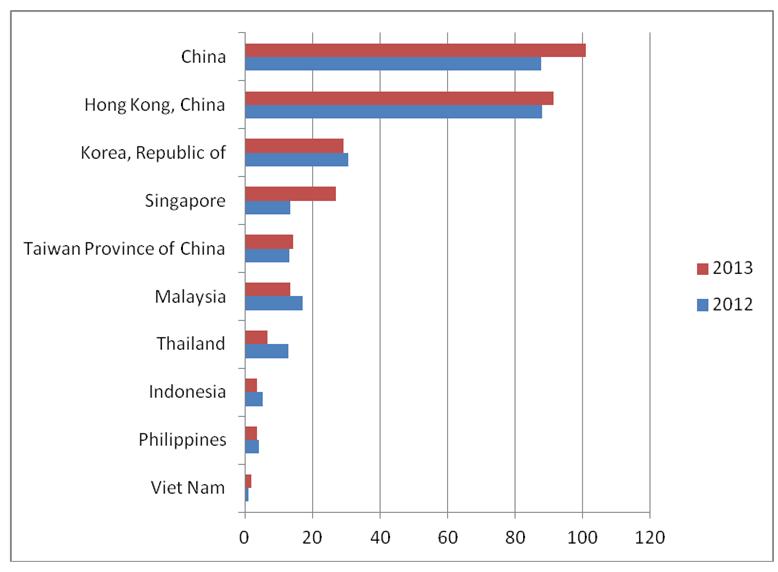