Foreign direct investment flows set to rise over the next three years, according to UNCTAD Report
Projected trend builds on 9 per cent increase in global FDI in 2013

Subtitled Investing in the SDGs: An Action Plan, the report focuses on channelling investment to sustainable development targets such as poverty reduction, social inclusion and climate change.

UNCTAD projects that global FDI flows will rise to $1.6 trillion in 2014, $1.75 trillion in 2015 and $1.85 trillion in 2016, driven mainly by investments in developed economies. However, fragility in some emerging markets and risks related to policy uncertainty and regional conflict could still derail the expected upturn in FDI flows. The regional distribution of FDI inflows may tilt back towards the “traditional pattern” of a higher share of global inflows received by developed countries. UNCTAD projections suggest that flows to developed countries as a share of global inflows could reach 52 per cent in 2016, after plummeting to less than 40 per cent in recent years (figure 1, table 1). Nevertheless, FDI flows into developing economies will remain at a high level in the coming years.

In 2013, FDI flows into developing economies reached a new high at $778 billion (table 1), accounting for 54 per cent of global inflows, although the growth rate slowed to 7 per cent, compared with an average growth rate over the past ten years of 17 per cent. Developing Asia continues to be the region with the highest FDI inflows. FDI inflows were also up in the other major developing regions: Africa (up 4 per cent) and Latin America and the Caribbean (up 6 per cent, excluding offshore financial centres). Developing countries and transition economies now also constitute half of the top twenty economies ranked by FDI inflows (figure 2).

FDI by transnational corporations (TNCs) from developing countries reached $454 billion in 2013 – another record high. Together with transition economies, they accounted for 39 per cent of global FDI outflows, compared with only 12 per cent at the beginning of the 2000s. Six developing and transition economies ranked among the twenty largest investors in the world in 2013 (figure 3). Increasingly, developing-country TNCs are buying up the foreign affiliates of developed-country TNCs in the global south.

In terms of regional groupings, the share of Asia-Pacific Economic Cooperation (APEC) countries in global inflows increased from 37 per cent before the crisis to 54 per cent in 2013. Although their shares are smaller, FDI inflows to Association of Southeast Asian Nations (ASEAN) and the Common Market of the South (MERCOSUR) in 2013 were at double their pre-crisis level, as were inflows to the BRICS (Brazil, the Russian Federation, India, China and South Africa).

The three mega-regional integration initiatives currently under negotiation – the Transatlantic Trade and Investment Partnership (TTIP), the Trans-Pacific Partnership (TPP) and the Regional Comprehensive Economic Partnership (RCEP) – show diverging FDI trends. The United States and the EU, which are negotiating the formation of the TTIP, saw their combined share of global FDI inflows cut nearly in half, from 56 per cent before the 2008 crisis to 30 per cent in 2013. As for the TPP, the declining share of the United States is offset by the expansion of emerging economies in the grouping, helping the aggregate share increase from 24 per cent before 2008 to 32 per cent in 2013. The RCEP accounted for more than 20 per cent of global FDI flows in recent years, nearly twice as much as the pre-crisis level.

Other notable trends in 2013 include:

The poorest developing economies are less dependent on natural resources in terms of FDI attraction. Historically, many poor developing countries have relied heavily on FDI in extractive industries. The share of the extractive industries in the cumulative value of announced cross-border greenfield projects is substantial in Africa (26 per cent) and in LDCs (36 per cent). However, the share of the extractive industries is rapidly decreasing. Data on announced greenfield investments in 2013 show that manufacturing and services make up about 90 per cent of the total value of projects both in Africa and in LDCs.

Private equity keeps its powder dry. In 2013, outstanding funds of private equity firms increased further to a record level of $1.07 trillion. However, their cross-border investment – typically through M&As – was only $171 billion ($83 billion on a net basis), a decline of 11 per cent. Private equity accounted for 21 per cent of total gross cross-border M&As in 2013, 10 percentage points lower than at its peak in 2007. Most private equity acquisitions are still concentrated in Europe and the United States, but deals are on the increase in Asia. Developing country-based private equity firms are beginning to emerge and are involved in deal making, not only in developing countries but also in more mature markets.

FDI by Sovereign Wealth Funds remains small, State-owned TNCs are heavyweights. Sovereign wealth funds (SWFs) continue to expand. Assets under management of SWFs approach $6.4 trillion and are invested worldwide, including in sub-Saharan Africa. Compared to the size of their assets, the level of FDI by SWFs is still small and limited to a few major SWFs. In 2013, SWF FDI flows were worth $6.7 billion with cumulative stock reaching $130 billion.

According to UNCTAD’s estimates, there are at least 550 State-owned TNCs – from both developed and developing countries – with more than 15,000 foreign affiliates and estimated foreign assets of over $2 trillion. FDI by State-owned TNCs is estimated to have reached more than $160 billion in 2013, accounting for over 11 per cent of global FDI flows.

Cash holdings by the top 5,000 TNCs remained high in 2013, accounting for more than 11 per cent of their total assets. Cash holdings by developed-country TNCs were estimated at $3.5 trillion, while TNCs from developing and transition economies held $1.0 trillion. The cash-to-assets ratios of developing country TNCs have remained relatively constant over the last five years at about 12 per cent. In contrast, the cash-to-assets ratios of developed-country TNCs increased in recent years, from an average of 9 per cent before the financial crisis to more than 11 per cent in 2013. This high level of cash holdings represents a huge potential as a source of development finance. 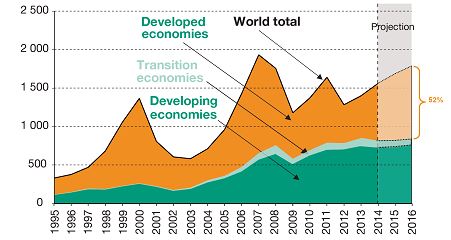 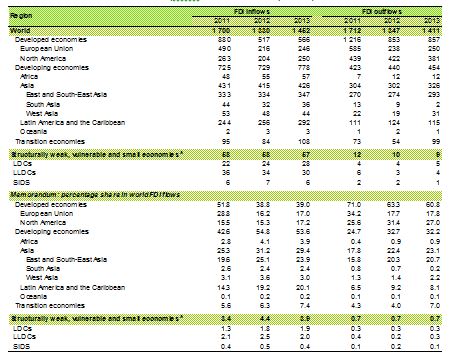 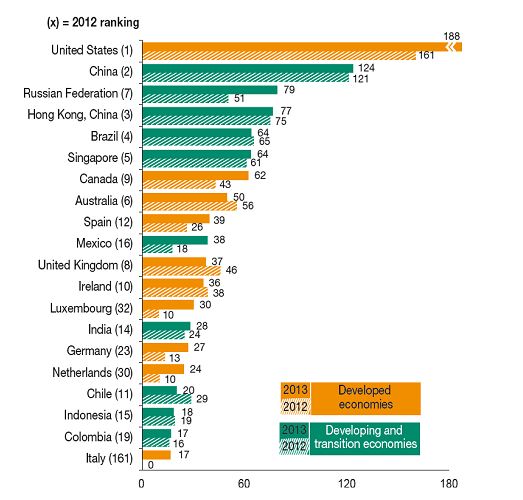 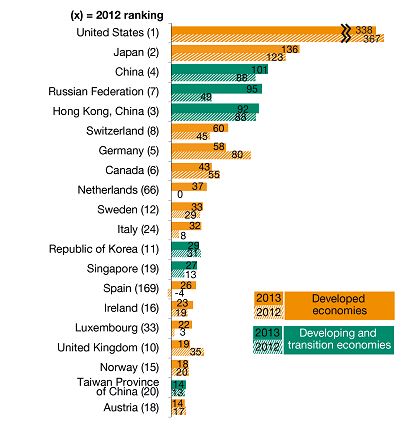 (billions of US dollars) 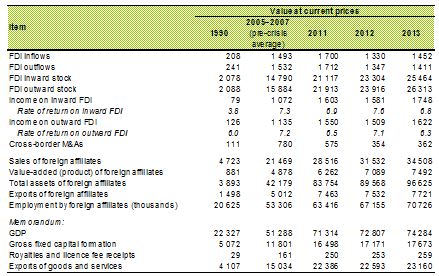