Foreign Direct Investment (FDI) flows into West Asia decreased in 2013 by 9 per cent to $44 billion, failing to recover for the fifth consecutive year from the fall registered in 2009, UNCTAD’s World Investment Report 20141 reveals. High and persistent regional tensions continue to increase political uncertainty and hold back foreign direct investors, according to the report, although differences exist among countries in the region.

While in countries like Saudi Arabia and Qatar, FDI flows continue to follow a downward trend, in others like Turkey and the United Arab Emirates, FDI recovery has been weak or bumpy in recent years with flows remaining well below their pre-crisis level. Only in Iraq and Kuwait have FDI flows been on an upward trend in recent years, reaching record levels in 2013 and 2012.

Turkey remained West Asia's main FDI recipient in 2013, with flows maintaining almost the same level as in the previous year – close to $13 billion. This was against the background of low cross-border M&As that dropped by 68 per cent to $867 million, their lowest level since 2004.

FDI flows to the United Arab Emirates continued their recovery, positioning this country as the second FDI recipient in the region after Turkey. They increased by 9 per cent to $10.5 billion, albeit well below their level in 2007. This FDI recovery went with the economy rebounding from the 2009 debt crisis, driven by both oil and non-oil activities.

Flows to Saudi Arabia declined for the fifth consecutive year. They dropped by 24 per cent to $9.3 billion, moving the country from the second to the third largest host economy in the region. This decline has taken place despite a range of large capital projects under way in infrastructure and in downstream oil and gas, mainly refineries and petrochemicals.

Flows to Iraq reached new highs. They are estimated to have increased by about 20 per cent to $2.9 billion in 2013 − despite high levels of instability affecting mainly central areas around Baghdad. This has taken place in the context of an economic resurgence underpinned by Iraq’s vast hydrocarbon wealth. Work on several large oilfields has gathered speed since the award of the largest oilfields to foreign oil transnational corporations (TNCs).

FDI flows to Kuwait are estimated to have decreased by 41 per cent in 2013, after having reached record highs in 2012 owing to a one-off acquisition deal worth $1.8 billion. FDI to Jordan increased by 20 per cent to $1.8 billion. Because of the country's geostrategic position, countries and foreign entities have been extending considerable new funding in the form of aid, grants, guarantees, easy credit and investment. FDI to Lebanon is estimated to have fallen by 23 per cent, with most of the flows still focused on the real estate market, which registered a significant decrease in investments from Arab Gulf countries.

FDI outflows from West Asia increased by 65 per cent in 2013, boosted by rising flows from the Gulf Cooperation Council (GCC) countries – Bahrain, Kuwait, Oman, Qatar, Saudi Arabia, and the United Arab Emirates. The GCC countries enjoy a high level of foreign exchange reserves, and while each of them augmented its investment abroad, a quadrupling of outflows from Qatar and a 159 per cent growth in flows from Kuwait explain most of the increase.

Outward FDI from the region is likely to continue to increase. In contrast, prospects for inward FDI remain bleak, as rising political uncertainty is a strong deterrent. 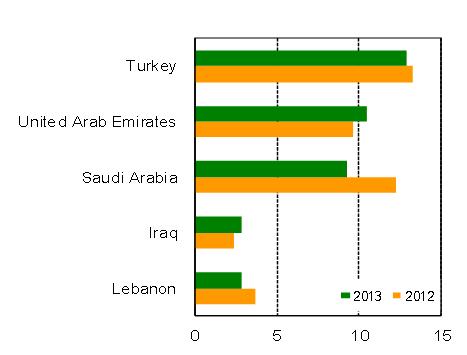 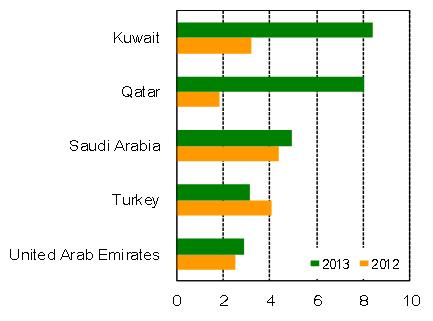