​Most investment measures adopted by governments in 2013 supported the liberalization and promotion of foreign investment, while international investment rulemaking shows diverging trends, UNCTAD's World Investment Report 20141 finds. Some countries show concerns regarding divestments or seek to promote re-shoring of overseas investments by their transnational corporations (TNCs).

Subtitled Investing in the SDGs: An Action Plan, the report focuses on channelling investment to sustainable development targets such as poverty reduction, social inclusion and climate change.

UNCTAD's policy monitoring shows that national investment policymaking in 2013 remained geared toward investment promotion and liberalization. At the same time, the overall share of regulatory or restrictive investment policies further increased from 25 to 27 per cent (figure 1). The majority of investment liberalizations were reported for countries in Asia and most related to the telecommunications industry and the energy sector. Newly introduced restrictions and regulations included a number of non-approvals of foreign investment projects.

The report also finds that some governments show concerns regarding divestments by foreign investors. Affected by economic crises and persistently high domestic unemployment, some countries have introduced new approval requirements for relocations and lay-offs. In addition, some home countries have started to promote re-shoring of overseas investment by their TNCs.

Incentives are widely used by governments as a policy instrument for attracting investment, despite persistent criticism that they are economically inefficient and lead to misallocations of public funds. According to UNCTAD's survey, in 2013, more than half of new liberalization, promotion or facilitation measures related to the provision of investment incentives.

A recent UNCTAD survey of investment promotion agencies found that investment incentives focus mostly on economic growth objectives, and less on sustainable development. While investment incentives can be used as a tool to advance public policy objectives – which in themselves are beneficial – such as job creation, skill transfer, R&D, export generation and linkages with local firms, linking investment incentives schemes to the Sustainable Development Goals (SDGs) to be set in 2015 could make them a more effective policy tool to remedy market failures and could offer a response to the criticism raised against the way investment incentives have traditionally been used. Furthermore, governments should carefully assess their incentives strategies and strengthen their monitoring and evaluation practices, the World Investment Report 2014 says.

At the international level, 2013 brought an increasing dichotomy in investment treaty making. After several years of decline, the pace at which new international investment agreements (IIAs) have been concluded has accelerated (figure 2). With the addition of 30 new bilateral investment treaties (BITs) and 14 "other IIAs", the global IIA regime reached close to 3,240 at the end of the year (figure 2). Countries that were particularly active in concluding BITs in 2013 include Kuwait (7), Turkey and the United Arab Emirates (4 each), Japan, Mauritius and the United Republic of Tanzania (3 each). At the same time, an increasing number of developing countries in Africa, Asia and Latin America are disengaging from the IIA regime.

The "up-scaling" trend in treaty making manifests itself in increasing dynamism (with more countries participating in ever faster sequenced negotiating rounds) and in an increasing depth and breadth of issues addressed. Today, IIA negotiators increasingly take novel approaches to existing IIA provisions (such as sustainable development features and provisions that bring a liberalization dimension to IIAs and/or strengthen certain investment protection elements) and add new issues to the negotiating agenda. 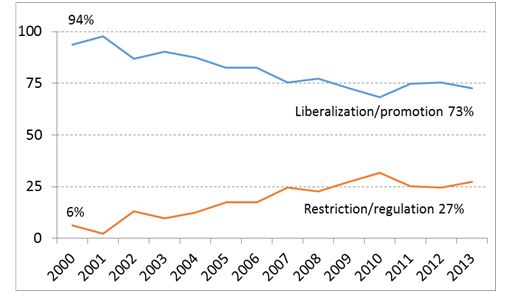 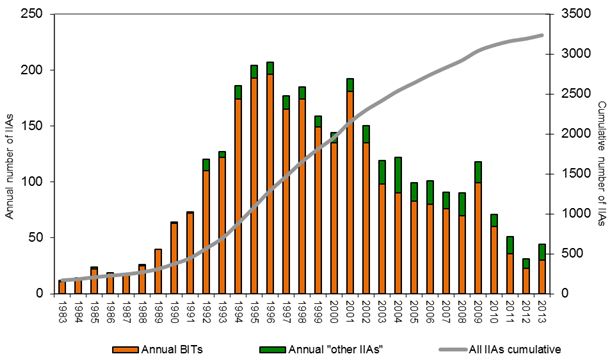