​A new UNCTAD report sees the threat to good jobs spreading to some developing countries but points to the real challenges lying ahead. The report recommends having digital industrial policies to ensure that robotics supports – rather than threatens – inclusive development.

“Robots are threatening jobs in developed and emerging developing countries alike but, as with any new technology, there are opportunities as well as risks,” said UNCTAD Secretary-General Mukhisa Kituyi, launching the Trade and Development Report 2017: Beyond Austerity – Towards a Global New Deal.

“The anxiety surrounding robots does not lie in their wider scope, faster speed or greater intrusiveness alone, but in their arrival at a time of subdued global macroeconomic dynamism,” said Mr. Richard Kozul-Wright, Director of the UNCTAD Division on Globalization and Development Strategies. “This has held back the investment needed to create new sectors, where workers displaced by robots could find better jobs.”

The big question is whether robots will reduce the familiar benefits of using industrialization as a development strategy, the landmark report says.

Routine tasks in well-paying manufacturing and service jobs are being replaced by robots, the report says, but low-wage manufacturing jobs in areas such as clothing factories are left largely unaffected by automation.

Although most jobs in developing countries are not under immediate threat, a tendency to further concentrate manufacturing activity in existing locations could follow, raising concerns that the gap between winners and losers from robot use will widen sharply.

The UNCTAD report finds that current robot use is working to the advantage of countries with established industrial capacity. This could further damage growth prospects in developing countries where manufacturing has stalled or that are already experiencing “premature deindustrialization”.

Such a concentration would make it harder to deliver the Sustainable Development Goals of the United Nations, part of a blueprint agreed by the international community in 2015 under the new drive to eradicate poverty and promote prosperity while also protecting the environment.

Cutting through the hysteria
Despite the hype surrounding the potential of robot-based automation, today the use of industrial robots globally remains quite small and amounts to less than 2 million units, the report says. Industrial robots are concentrated in the automotive, electrical and electronics industries, and in a small number of countries. Almost half of operational industrial robots are in Germany, Japan and the United States of America, but China has quadrupled its robot stock since 2010, and the Republic of Korea has the highest number of robots per worker globally.

Most existing studies overestimate the potential adverse employment and income effects of robots, because they neglect to take into account that what is technically feasible is not always also economically profitable, the report says (see figure 1). The countries currently most exposed to robot-based automation are those with a large and well-paying manufacturing sector (see figure 2). Robotization has had a small effect on most developing countries, where mechanization continues to be the predominant form of automation.

Challenges for policymakers
It is critical to ensure that robot use does not hit income distribution, the report says, warning that it risks increasing the share of income going to the owners of robots and the intellectual property that they incorporate. Options to stop this include schemes where employee earnings depend on the firm’s profitability so that a substantial part of citizens’ income would come from capital ownership rather than from working.

However, the report also warns that a “basic income”, currently fashionable among high-tech entrepreneurs, is not a substitute for strengthening workers’ rights and boosting welfare provision.

The question of whether robots hamper industrialization’s development role partly depends on who owns and controls robot technology, on possible first mover advantages from the use of robots and in which manufacturing sectors their impact is most pronounced. In all these respects, a decisive factor will be the effective design and implementation of digital industrial policies and ensuring the policy space to use them.

Source: UNCTAD.
Note: Size of bubbles reflects global use of robots in a given manufacturing sector. Negative versus positive deviation from average compensation indicates relatively low-paying or high-paying manufacturing jobs, respectively. Levels of routine tasks indicated as being less or more routine-task intensive.


Figure 2: Exposure to robot-based automation: no severe threat for most developing countries
(Percentage) 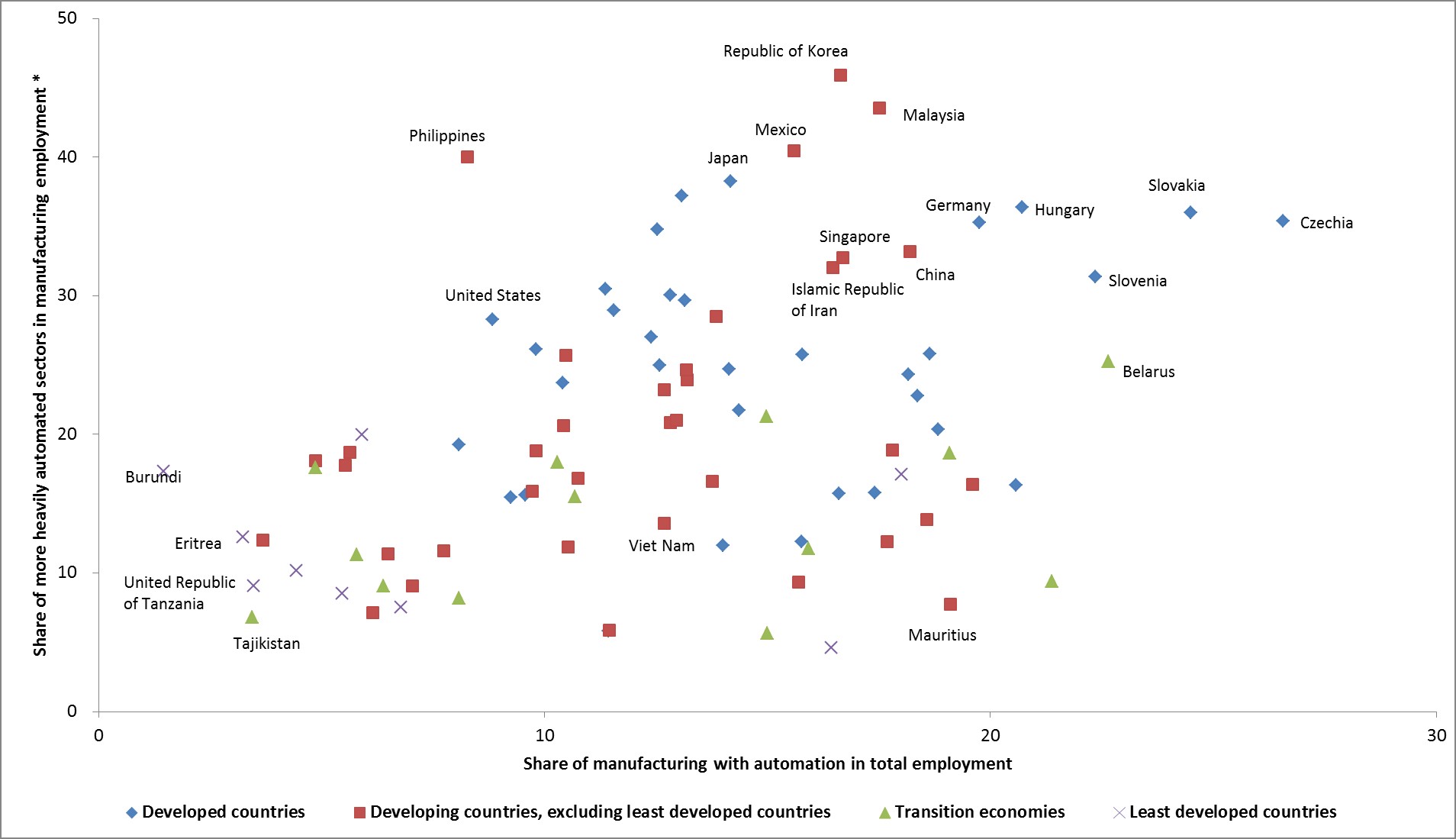 Source: UNCTAD.
* Manufacturing sectors with tendency to be more heavily automated: automotive, electronics and chemical, and rubber and plastic sectors.