​Developing countries, with the burgeoning skills of their domestic software writers, should seek to expand the creation of software that meets local needs and capabilities as a means of increasing income and addressing broader economic and social development goals, a new UNCTAD report recommends.

The Information Economy Report 20121 , subtitled The Software Industry and Developing Countries, was released today. It urges governments to adopt policies that can help build domestic software capabilities. Developing such software locally increases the chances that it will fit the context, culture, and language where it is used, the Report notes.  Consequently, developing capabilities to adopt and adapt software solutions, and eventually to create software locally, adds an economic advantage. The Report says that such capabilities also can help to expand exports of software.

Widespread mobile phone use and improved broadband connectivity are expanding the possibilities for developing countries to participate in software development and production.

Enhanced access to information and communication technologies (ICTs) and related services, including in the least developed countries (LDCs), is widening the potential for ICT-induced development gains in areas such as health, education, governance, and business creation and expansion, the Report says. But in order to ensure that improved ICT access brings about the desired benefits, the software used in various devices and services has to be adapted to the needs and capabilities of users. Well-adapted software can, for example, help firms to manage their resources better, to obtain information more efficiently, and to operate their business at lower cost.

Software production and development can contribute to the structural transformation of economies – that is, wean them away from dependence on low-technology goods and on a limited number of products for export, the Report contends. It can also boost learning, innovation and job creation, especially for skilled youth.

In addition, market opportunities are growing for those who create software in developing countries. Public procurement related to “e-government” solutions is one important source of domestic demand. The market is also expanding for mobile applications aimed at improving access to domestic news and entertainment, government services, patient care, market information services, and “mobile money”. The mobile apps industry is estimated to have generated worldwide revenue of $15–20 billion in 2011, and that may rise to $38 billion by 2014.

Better access to high-speed Internet has rapidly made online work (also referred to as crowdsourcing or remote, contract, or freelance work) a prominent feature in global software development, the Report says. Many software writers in developing countries are already involved in such activities. For example, Elance.com, one of the main platforms for online work, engages workers from over 150 countries. In Bangladesh, some 10,000 freelance programmers are reportedly earning some $15 million per year – an amount that is equivalent to a quarter of the country's software exports.

There is room for developing countries to make better use of their software potential. Spending on computer software and services amounted to an estimated $1.2 trillion in 2011. As much as four fifths of the total was linked to industrialized countries, while the remaining share was mainly accounted for by developing countries in East, South, and South-East Asia. The combined spending in the rest of the developing world in this sector came to only 4 per cent of the world total (fig. 1).

Developed regions also spend more on software and services as a share of their overall ICT spending (fig. 1). For example, in North America, computer software and services make up 43 per cent of all ICT spending, compared with only about 11 per cent in Africa and Latin America. Such low ratios signify limited software use, which may hinder progress towards a more inclusive information society, the Report says.

There are significant differences between countries in terms of the market orientation of their software production (fig. 2). In some developing countries (such as Costa Rica, Sri Lanka and Uruguay), computer software and IT service exports exceed the value of domestic spending on software and services by a wide margin, while domestic software spending is relatively low. This may suggest that domestic software needs are crowded out by demand from foreign markets, the Report says. In other countries (including Brazil, Chile, Kenya and South Africa), domestic software spending is high but exports are low, indicating scope for an expansion of exports. Argentina, India, Malaysia and the Philippines are among the low- and middle-income countries that have relatively high levels of both exports and domestic sales of software.

For countries with nascent software sectors, catching up initially mostly involves a considerable degree of adoption of software that has been developed abroad. Reselling, installation, customization and training linked to packaged software imported from abroad often serves as a starting point for local enterprises before they can move on to higher value-added activities. The domestic market is important, because it helps enterprises to develop relevant skills and create new products, the Report says. The performance of China is striking. According to official national statistics, China’s software production surged from $7 billion in 2000 to $285 billion in 2011. As much as 90 per cent of this was for the domestic market – but it was often embedded in ICT goods, as well as other goods, that were subsequently exported.

Governments should take an active part in fostering software capabilities and in strengthening their national software systems (fig. 3), the Report recommends. Governments are significant buyers of software. They also determine the curricula for the education of software engineers, influence the availability of affordable ICT infrastructure, and shape legal and regulatory frameworks affecting ICT uptake and use. At the same time, national software strategies should be informed via consultations with other actors, including the software industry, universities, and software developer communities, and with various users. Strategies should also be integrated into a country’s broader ICT policies, the Report urges.

Key policy areas include the development of affordable ICT infrastructure, skills development through universities and specialized training institutes, the adoption of business and legal frameworks, and streamlining of the interactions between domestic software producers, software users, and international networks. In a new survey of national IT/software associations, carried out by UNCTAD and the World Information Technology and Services Alliance (WITSA), the most frequently cited barriers to growth of the software and IT services industries were a lack of venture capital, a shortage of qualified employees, and too little public procurement (table 1).

The Report recommends that Governments use public procurement related to e-government systems as a strategic tool to spur domestic demand for software. In this context, the reliance on open standards and free and open source software (FOSS) is desirable when it offers competitive solutions to domestic needs, the Report contends. By promoting grassroots creativity, innovation, leadership and teamwork, FOSS can support learning processes that enable users to become creators of software rather than just passive adopters of software technology, the Report says. Other strategic advantages of FOSS include a lowering of the cost of ownership for new software, and a reduction in errors. New developments in the ICT landscape, with the growing importance of cloud computing, mobile applications and “big data”, are further expanding the role of FOSS.

Figure 1. Spending on computer software and services, and on ICT, by region, 2011 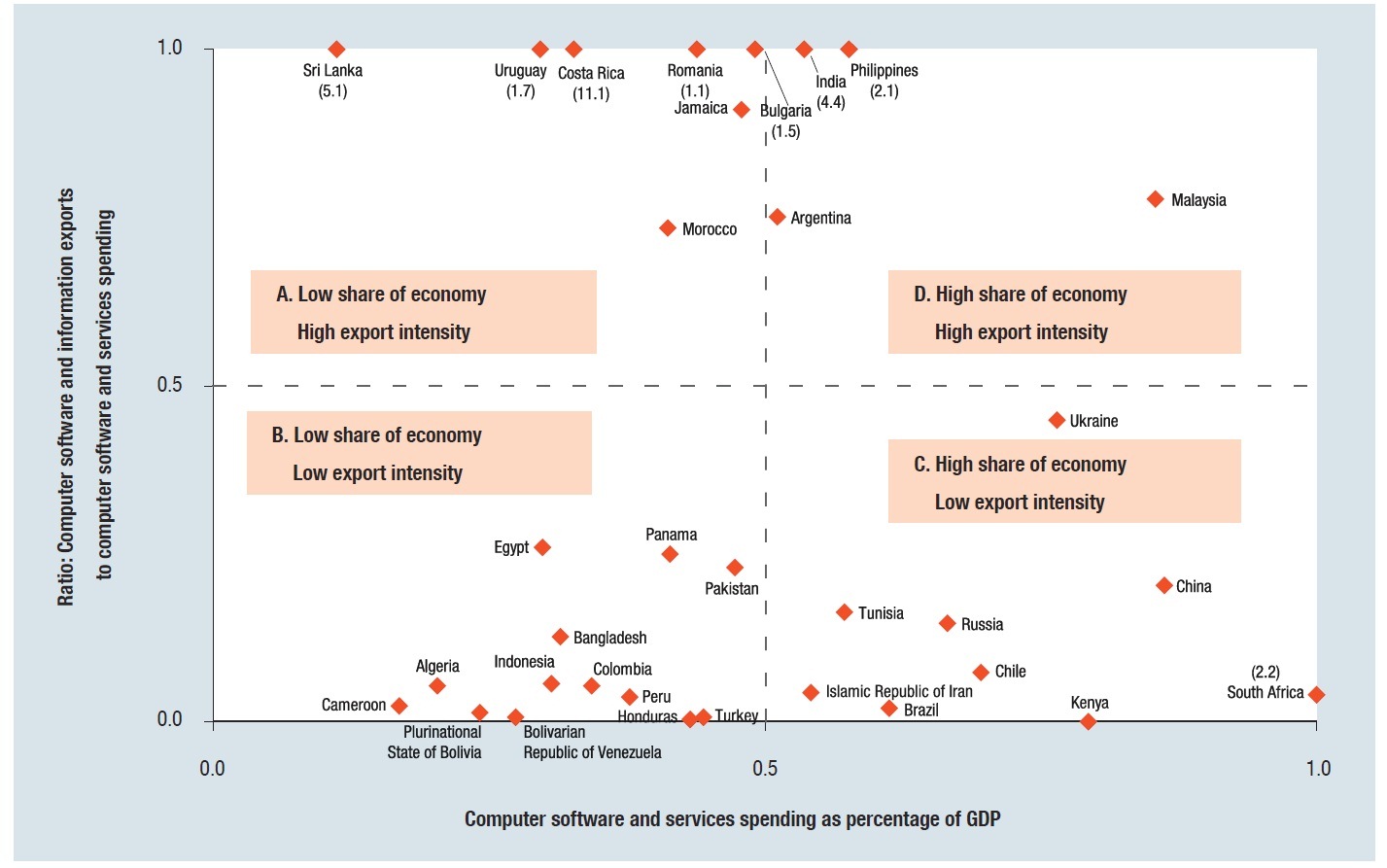 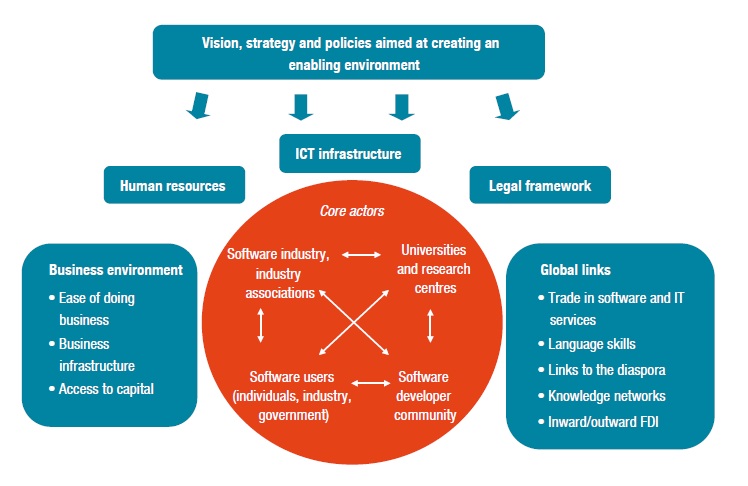 Table 1. Main barriers to the growth and development of the software and IT services industry
(share of respondents mentioning factor)