“The beginnings of a commodity price recovery, as well as advances in interregional cooperation through the signing of the African Continental Free Trade Area agreement, could encourage stronger FDI flows to Africa in 2018, provided the global policy environment remains supportive,” UNCTAD Director, Division on Investment and Enterprise, James Zhan said.

FDI flows to North Africa were down 4% to $13 billion. Investment in Egypt was down, but the country continued to be the largest recipient in Africa. FDI in Morocco was up 23% to $2.7 billion, including as a result of sizeable investments in the automotive sector.

Lingering effects from the commodity bust weighed on FDI to sub-Saharan Africa, with inflows declining by 28%, to $28.5 billion. FDI flows to Central Africa decreased by 22% to $5.7 billion. FDI to West Africa fell by 11% to $11.3 billion, due to Nigeria’s economy remaining depressed. FDI to Nigeria fell 21% to $3.5 billion.

East Africa, the fastest-growing region in Africa, received $7.6 billion in FDI in 2017, a 3% decline on 2016. Ethiopia absorbed nearly half of this amount, with $3.6 billion (down 10%) and is now the second largest recipient of FDI in Africa. Kenya saw FDI increase to $672 million, up 71%, due to strong domestic demand and inflows in information and communication technology sectors.

In Southern Africa, FDI declined by 66% to $3.8 billion. FDI to South Africa fell 41% to $1.3 billion, due to an underperforming commodity sector and political uncertainty. FDI into Angola turned negative once again (down to -$2.3 billion from $4.1 billion in 2016) as foreign affiliates in the country transferred funds abroad through intra-company loans. In contrast, FDI into Zambia increased, supported by more investment in copper.

Multinational enterprises (MNEs) from developed economies (such as the United States, United Kingdom and France) still hold the largest FDI stock in Africa. At the same time, developing-economy investors from China and South Africa, followed by Singapore, India and Hong Kong (China), are among the top 10 investors in Africa.

FDI outflows from Africa increased by 8% to $12.1 billion, reflecting a significant increase in outward FDI by South African firms (up 64% to $7.4 billion) and Moroccan firms (up 66% to $960 million). Outward FDI by Nigerian firms, in contrast, remained flat at $1.3 billion, focused almost exclusively on Africa.

FDI inflows to Africa are forecast to increase by about 20% in 2018 to $50 billion. The projection is underpinned by the expectations of a continued modest recovery in commodity prices and strengthened interregional economic cooperation. Yet Africa’s commodity dependence will cause FDI to remain cyclical. 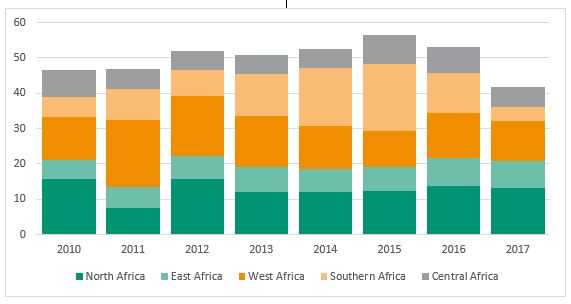 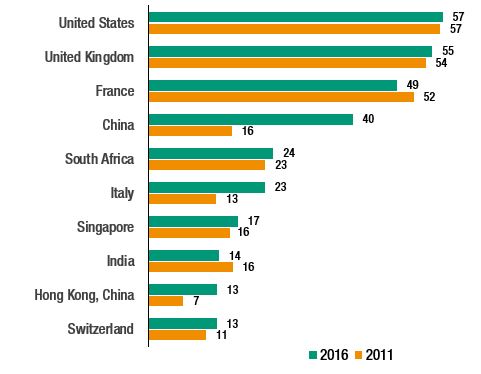 Source: UNCTAD, World Investment Report 2018.
Note: Numbers presented in this figure are based on the FDI stock data of partner countries.