Delivering the 18th edition of UNCTAD’s Raúl Prebisch Lecture, he called for developing countries to be at the centre of solutions to the crisis. 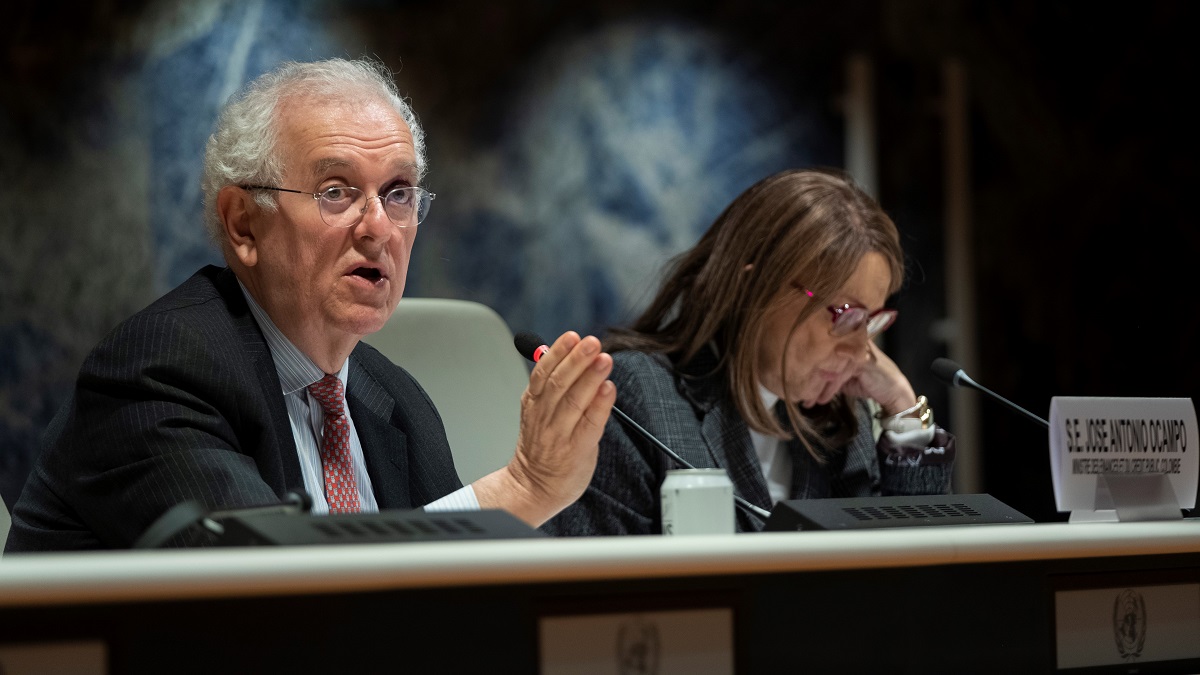 © UNCTAD | José Antonio Ocampo (left), Minister of Finance and Public Credit of Colombia, and Rebeca Grynspan, Secretary-General of UNCTAD, during the 18th Raúl Prebisch Lecture at the Palais des Nations in Geneva.

Colombia’s Minister of Finance and Public Credit, José Antonio Ocampo, has called for urgent policy actions to tackle the economic dimensions of the current cascade of global crises.

Mr. Ocampo delivered on 23 January the 18th edition of the prestigious Raúl Prebisch Lecture, a series organized by UNCTAD and named after the organization’s first secretary-general.

He underscored the need to strengthen international tax cooperation, improving on the 2021 agreement in the Organisation for Economic Co-operation and Development’s Inclusive Framework in its two dimensions: limiting tax competition and fair taxation of multinational companies.

“To these we should add combating tax evasion,” he said.

Mr. Ocampo also underlined the need for “counter-cyclical financing of developing and emerging economies, including in that regard the central role of multinational development banks.”

He said a growing number of middle-income economies are facing severe debt problems that can be addressed through additional support from these banks, which should be adequately capitalized.

“To this add the need for active official development assistance and adequate funds to finance climate change mitigation and adaptation,” Mr. Ocampo said.

Dimensions and effects of current crisis

“The current crisis has many dimensions, underscored by the concept of ‘polycrisis’, which has become a fashionable term,” Mr. Ocampo said.

He focused on the economic dimensions of the crisis but noted that many are associated with geopolitical tensions, particularly due to the war in Ukraine and growing tensions between the US and China.

“First, the remains of the COVID-19 crisis, including because of large inequalities in the access to vaccines and the possible effects of the elimination of the Chinese on restrictions to mobility,” he said.

Second, the mix of inflation and interest rates, and the possible recessions, “although not quite stagflation”.

Third, the food crises in many parts of the developing world, largely generated by the effects of the war in Ukraine, but also due to natural disasters associated with climate change. Mr. Ocampo gave the example of recent floods in Colombia.

Fourth, the worldwide rise of interest rates and rising risk margins that generated an outflow of capital from emerging economies in 2022.

Fifth, the high debt ratios generated by the COVID-19 crisis but also by high interest rates, which have generated debt crises in many developing and emerging economies.

“Sixth, the reversal of climate change policies generated also by the war in Ukraine, as well as the clearly insufficient efforts to adopt policies to reach the climate change goals reached in Paris in 2015,” Mr. Ocampo added.

Seventh, the changes in world trade that have taken place due to the slowdown in international trade, the disruptions of value chains generated by the COVID-19 crisis (nearshoring) but also by new waves of protectionism, particularly between the US and China.

Mr. Ocampo noted that globalization is changing both due to economic and geopolitical events, saying it should be more friendly to developing and emerging economies.

“The rupture of multilateralism is the major constraint in this regard.”

He said the United Nations should be the centre of a revitalized multilateralism, to manage the geopolitical tensions but also the sustainable development challenges well captured in the UN Sustainable Development Goals.

The prestigious Raúl Prebisch Lecture is periodically delivered by a prominent thinker or head of state. The lecture, organized by UNCTAD, often tackles trade and development issues but also covers other topical global concerns.

The lecture series began in 1982, with the inaugural lecture given by its namesake, the late Raúl Prebisch.

Known primarily for his work as a scholar specializing in international and development economics, his greatest contribution to economics is the Prebisch-Singer thesis.