The world iron ore market achieved an all-time high for production in 2011 of 1.92 billion tons, UNCTAD’s Iron Ore Market 2011–2013 reports. But uncertainty over prices and decrease of corporate concentration signal tight conditions for several years to come, the study concludes.​ 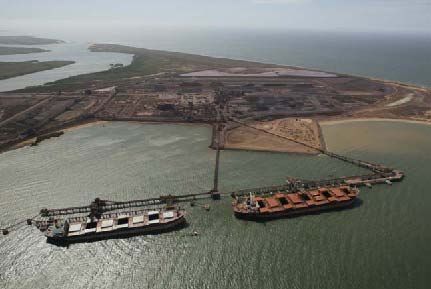 The e-version of the report was released in June. A hard-copy version has now been published by the UNCTAD Trust Fund on Iron Ore Information.

The Trust Fund Project on Iron Ore Information was started in June 1989 to continue the collection and dissemination of information on iron ore formerly carried out by the Association of Iron Ore Exporting Countries (APEF). The Trust Fund is administered by the UNCTAD secretariat. It is financed by income from the sales of its publications and by contributions from the Governments of Brazil, Canada, Sweden, and the United States of America.

Since 2002, the reports of the Trust Fund have been prepared by the UNCTAD secretariat in cooperation with the Raw Materials Group, Sweden.

The report indicates that world iron ore production continued to grow after the gradual post-crisis recovery of the global steel industry, as new mining capacity starting operation since May 2011 reached 125 million tons. Output of this commodity, vital for steel production, increased in most regions and countries except Europe (including CIS countries), where production stagnated.

Among the major producers, Australia increased production by 12.7 per cent, Brazil by 5.1 per cent, and China by 2.1 per cent. Production in India declined to an estimated 196.0 million tons in 2011, down 7.5 per cent.

In 2011, international iron ore trade reached a record 1.115 billion tons as exports increased for the tenth year in a row, the report says. Developing countries accounted for 49.5 per cent of total exports in 2011. Their exports of iron ore have grown by 104.8 per cent since 2002.

The world recovery in crude steel production since the financial crisis has been almost entirely due to China, where production started increasing again in November 2008, and previous peaks in monthly production had already been matched by April 2009. Subsequently, China’s imports of iron ore increased by 11.0 per cent in 2011 compared with 2010, or to 686.7 million tons, and the country accounted for 60.1 per cent of total world imports, the report notes.

Steel production elsewhere in the world was also growing, though it had still not reached its pre-crisis production levels by the end of 2011. In Japan, imports of iron ore fell by 4.4 per cent to 128.4 million tons. Imports by the Republic of Korea increased by 15.3 per cent to 64.9 million tons. European imports (excluding the CIS countries) rose by 16.8 per cent in 2011, reaching 156.4 million tons, or just over 13.7 per cent of world imports.

Iron ore prices continued on an upward trend through most of 2011, the report says, as Chinese demand recovered and domestic Chinese iron ore producers were unable to keep up with this demand. Towards the end of 2011, however, prices declined in response to a slowdown in Chinese growth and the worsening economic outlook for European countries. During the first half of 2012, prices remained more or less constant at a level which, although high from a historical point of view, just allows high-cost producers, such as those in China, to break even, the report says.

With almost all iron ore producers and steel mills having abandoned the benchmark pricing system where prices were set once a year, there is widespread confusion about prices, the annual study notes. There are three competing published price indices (Metal Bulletin, Platts and The Steel Index), and other prices are published on an informal basis. The full effects of the new pricing mechanisms are still not clear, but the report considers it unlikely that the new models will have any major effect on price levels. It predicts, however, that price volatility will increase compared with the previous system, as new practices for price setting vary widely, and there are a large number of published prices and indices, each with a different product specification.

The three largest iron ore-producing companies, Brazil-based Vale, Rio Tinto and BHP Billiton (the latter two with most of their production in Australia), together controlled 34.7 per cent of world production in 2011, the reports says. The market share of the “Big 3” decreased, albeit slightly, from 35.0 per cent in 2010, and their share is still lower than the peak of 36.4 per cent achieved in 2005.

In total seaborne trade, the share controlled by the “Big 3” fell from 60 per cent in 2009 to 58 per cent in 2010 and then to 57.3 per cent in 2011. Corporate concentration in the iron ore industry at all levels – that is, among the largest, the three largest and the 10 largest companies – decreased, the report notes. The declines in market shares are the result of new production being started in many countries by smaller and also mid-sized producers, the report says.

On the basis of an unchanged relationship between iron ore demand and crude steel production, the report estimates that iron ore use will increase from 1.92 billion tons in 2011 to about 2 billion tons in 2012 and 2.08 billion tons in 2013. The report also estimates that the world iron ore market will be characterized by tight conditions for several years to come, although prices will decline as supply gradually adapts to continuously growing demand by way of additional new capacity. It says that prices, while declining slowly from 2013 onwards, will remain at levels that must be considered high from a historical perspective, with a floor at around $120 per ton delivered in China.