​UNCTAD’s report on assistance to the Palestinian people details how the economy of the Occupied Palestinian Territory (OPT) lost ground and slowed further in 2013 and 2014. It underlines that deterioration of the Palestinian economy, largely rooted in the territory’s occupied status, has resulted in weak growth, a precarious fiscal position, forced dependence on the Israeli economy, mass unemployment, wider and deeper poverty and greater food insecurity. Palestinian women continued to bear the brunt of occupation, condemning them to one of the lowest labour participation rates and the highest unemployment rate in the world.

Economic growth in OPT, measured by gross domestic product (GDP), declined from an annual average of 11 per cent in 2010 and 2011 to a mere 1.5 per cent in 2013, much below the rate of population growth, resulting in lower income per capita. Unemployment remained extremely high at 36 per cent in Gaza and 22 per cent in the West Bank, and only one in four households was classified as “food secure” or having reliable access to food.

The new report discusses recent developments in, and reviews the main restrictions on, the OPT economy. Completed before the outbreak of hostilities in Gaza last July, the report does not take into account the devastating economic impact of this most recent confrontation. However, even before the latest military operations, Gaza’s local economy was in a state of total collapse, chiefly because of the accumulated impact of a tightly maintained seven-year blockade and two previous devastating Israeli military operations in November 2012 and December 2008. The consequences will be grave for the Palestinian people and their economy, UNCTAD economists warn.

The reconstruction of the Palestinian economy in general and that of Gaza in particular requires not only substantial foreign aid but also renewed development efforts through investing in productive sectors and crucial infrastructure so that the productive base is rebuilt. However, any lasting recovery of the Palestinian economy in general will be impossible to attain without a sustained effort on the part of the international community to bring about an end to the restrictions on movement in and access to the West Bank, alongside the complete lifting of the blockade, which has been smothering Gaza’s local economy and isolating 1.8 million people from the outside world. This could reverse the momentum of “de-development”, which has been reinforced by reoccurring military campaigns.

“De-development” of the Occupied Palestinian Territory is accelerated

The seven-year Israeli blockade has not given Gaza’s local economy a chance to recover. Exports from Gaza are almost completely banned, imports are severely restricted and the flow of all but the most basic humanitarian goods has been suspended for years. Gaza’s local economy has been further suppressed by restrictions on the transfer of cash, including dollars and Jordanian dinars, which have stunted its banking sector.

The most recent Israeli military operation in Gaza compounds the dire socioeconomic conditions and accelerates “de-development” in OPT, a process by which development is not merely hindered but reversed by the forces and policies of occupation. In addition to the deaths and mass displacement of thousands of Palestinian civilians, the military operation inflicted massive damage on Gaza’s physical infrastructure. According to the latest United Nations estimates, more than 40,000 housing units, 141 schools, 29 hospitals, dozens of factories and vast areas of cultivated agricultural land, as well as Gaza’s only power plant, were destroyed or damaged. Recent communications between Palestinian officials and the United Nations team on the ground indicate that the cost of reconstruction and rehabilitation is in the billions of dollars.

Living conditions in Gaza were already at their worst before the outbreak of the latest military operation, which will therefore have a far more severe impact on the population compared to previous Israeli military operations. It is crucial for the international community to base future recovery and reconstruction efforts on the fact that the devastation in Gaza is not just the result of the latest confrontation but is rooted in prolonged occupation, protracted conflict, a sustained, tightly maintained blockade and the recurrent destruction of Gaza’s infrastructure, as has been documented annually in UNCTAD reports on the Palestinian economy since 1985.

A special section of UNCTAD’s report focuses on the impact of the continuing occupation of Area C (see figure) and asserts that the lack of sovereignty over economic and natural resources deprives the Palestinian people of the opportunity to pursue and achieve sustainable economic development.

Area C encompasses 62 per cent of the West Bank, rich in natural resources, but it remains under full Israeli control. UNCTAD’s report notes that Israeli control of Area C effectively prevents the Palestinian people from using their own natural resources and building on their own land. The Government of Israel has designated 39 per cent (more than twice the area under Palestinian control in Area A) for settlements and their future expansion, 20 per cent for closed Israeli military areas (including “firing zones”) and 13 per cent for natural reserves.

Israel effectively bans all Palestinian construction in 70 per cent of Area C, allowing just 1 per cent for Palestinian development, while restricting construction in the remaining 29 per cent. In violation of its international obligation as the occupying Power, Israeli policies in Area C and the ongoing construction and expansion of illegal settlements have altered the West Bank’s landscape into an archipelago of disconnected islands, the report says. Furthermore, settler violence against Palestinian civilians and property exacts high socioeconomic tolls on the Palestinian people. For instance, in 2013 alone 10,142 productive trees were reported burnt, uprooted or vandalized, the report notes.


Displacement of Palestinians and demolition of infrastructure continue

The UNCTAD report adds that while the displacement of Palestinians continues, the number of settlers in the West Bank, who live in at least 125 settlements and 100 outposts, rose from 800 in 1972 to more than 360,000 in 2012.

Meanwhile the Palestinian population in Area C can hardly obtain permits for planning schemes from the Israeli Civil Administration which retains full power over planning, zoning and issuance of building permits. The report also notes that in the last five years, 2,224 Palestinian structures were demolished including residential structures and schools, while 2,417 Palestinians in Area C were displaced. In 2011 alone 1,000 structures were demolished. While Palestinians have extremely limited access to the natural resources in Area C, Israeli settlers freely exploit these resources, including marble, stones, building materials and Dead Sea minerals and salts.

In a nutshell, Palestinian public and private investments are forbidden, and sovereignty is denied in Area C. This adds significantly to the staggering economic cost of the occupation.

The total direct and indirect cost of occupation in Area C is estimated at a minimum of 35 per cent of Palestinian GDP ($3.5 billion). In terms of public finance, if the resources of Area C were accessible to Palestinians, the additional tax revenue could cut the Palestinian National Authority’s budget deficit by half. Additionally, the lack of Palestinian control over Area C not only deprives the economy of cultivable land and exploitable natural resources, it forestalls the development of critical economic institutions, such as banks as well as other infrastructure projects.

The new report emphasizes that Area C is fundamental to the geographic contiguity of the West Bank and economic viability of the two-State solution and necessary for the development of public infrastructure and the needs of Palestinian communities, not only in Area C but in the whole West Bank. The report also emphasizes the need for all stakeholders (Palestinian National Authority, private sector, civil society and international organizations) to establish coordinated and coherent policies, strategies, mechanisms and interventions to achieve economic development in Area C. Indeed, both Area C and the Gaza Strip, as well as occupied East Jerusalem, have been declared “priority development zones” by the Palestinian National Authority, and the international community should take this signal into account when designing future development interventions.

UNCTAD assistance to the Palestinian people

In addition, UNCTAD continued its annual hosting and training of staff from the Palestinian Ministry of National Economy. Trainees were introduced to the work of UNCTAD and other Geneva-based United Nations agencies and international organizations.

UNCTAD also continued to produce relevant policy studies on Palestinian economic development, provide advisory services to the Palestinian National Authority and the Palestinian private sector and cooperate with various United Nations agencies by providing inputs to several relevant reports and meetings on the question of Palestine. 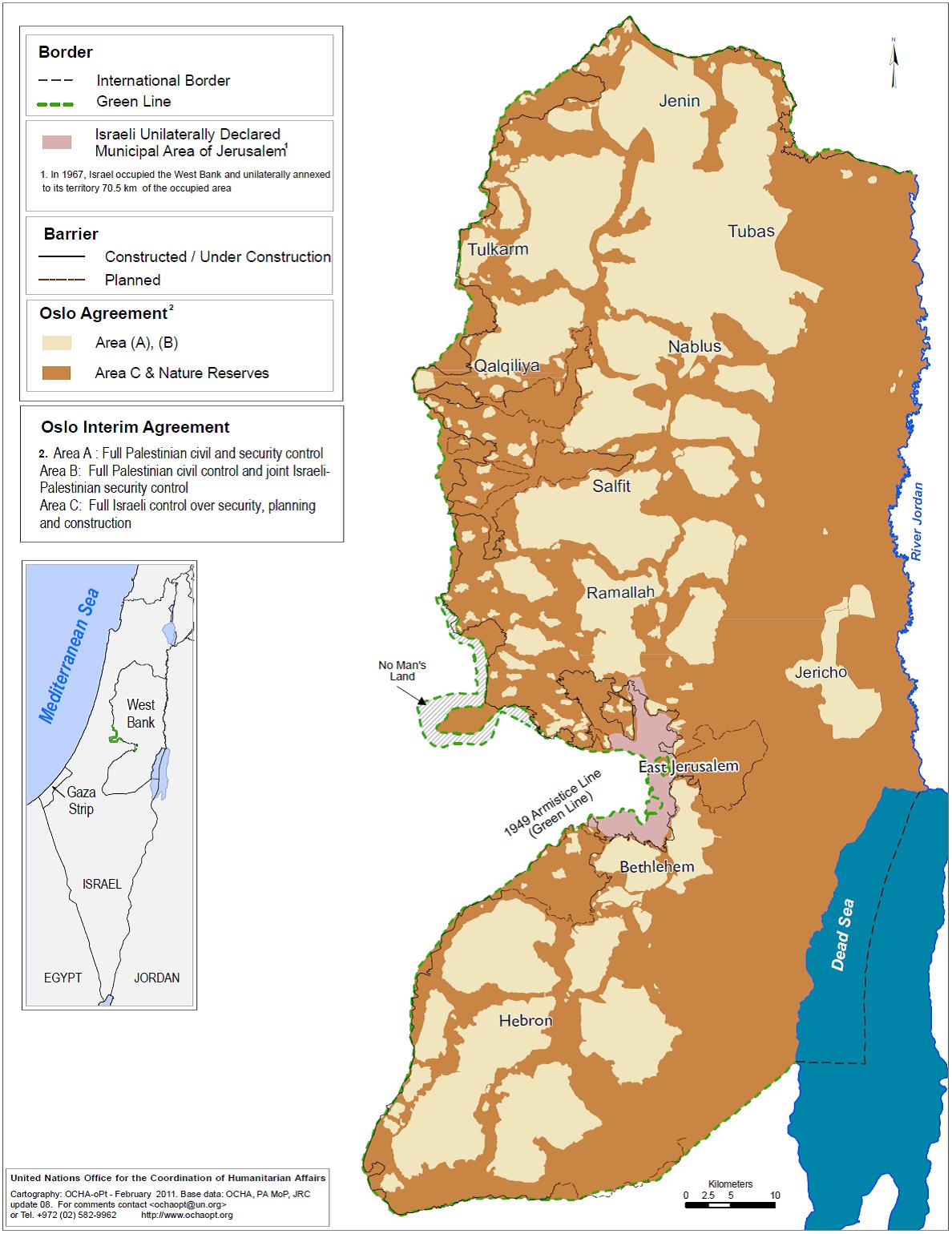