The world economy remains on shaky ground a decade after the 2008 financial crisis, with trade wars a symptom of a deeper malaise, according to the UNCTAD publication, Trade and Development Report 2018: Power, Platforms and the Free Trade Delusion.

While the global economy has picked up since early 2017, growth remains spasmodic, and many countries are operating below potential, states the report. This year is unlikely to see a change of gear (see table).

“The world economy is again under stress,” said Mukhisa Kituyi, Secretary-General of UNCTAD. “The immediate pressures are building around escalating tariffs and volatile financial flows but behind these threats to global stability is a wider failure – since 2008 – to address the inequities and imbalances of our hyperglobalized world.”

The annual Trade and Development Report analyses current economic trends and major international policy issues and makes suggestions for addressing them. The 2018 report examines how economic power is being concentrated in a smaller number of big international firms and the impact this is having on the ability of developing countries to benefit from their participation in the international trading system and to gain from new digital technologies.

The report states that many advanced countries have since 2008 abandoned domestic sources of growth for external ones, most noticeably with the turnaround of the eurozone from a deficit to a surplus region (figure 1). But this can only work by tapping into other countries’ domestic demand – and among countries that do depend on domestic demand, too many are relying on a combination of higher debt and asset bubbles rather than boosting wages (figure 2). In either case, growth is hindered by the ever-present threat of financial instability.

The bigger emerging economies are doing better this year, the report says, and commodity exporters can expect an improvement while prices remain firm. Except for the Russian Federation, growth in the other four BRICS countries – Brazil, India, China and South Africa –– relies heavily on domestic demand.

However, that is not the case for many other emerging economies. With downside risks increasing and financial fault lines widening in several countries, the report sees economic storm clouds gathering. Today’s $250 trillion debt stock – 50 per cent higher than at the time of the crisis – is three times the size of the global economy. Private debt, particularly corporate debt, has been behind this surge in borrowing but without stimulating business investment – a disconnect that spells trouble ahead (figure 3).

Even as advanced economies have not done enough to rebalance the global economy, there are concerns that their “normalizing” monetary policies could send new shock waves through capital and currency markets, with a vicious economic spiral in more vulnerable economies already looking possible (figure 4).

“The growing indebtedness observed globally is closely linked to rising inequality,” said Richard Kozul-Wright, lead author of the report. “The two have been connected by the growing weight and influence of financial markets – a defining feature of hyperglobalization.”

Global trade continues to be dominated by big firms through their organization and control of global value chains with, on average, the top 1 per cent of each country’s exporting firms accounting for more than half its exports.

The spread of these chains contributed to a rapid growth of trade from the mid-1990s up to the financial crisis, with developing countries posting the fastest growth, including by trading more with each other.

But the report shows that countries have had to trade more intensely to generate the same growth of output as in the past and that too much of this trade has been unequal, with gains skewed in favour of lead firms through a mixture of increased market concentration and control of intangible assets.

The report documents a general decline – with China an exception – in the share of value added from manufacturing activities in these chains and a rise in the share of pre- and post-production activities; the rents captured at these ends of the chain have had a pronounced effect on the distribution of income in all countries. “Superstar firms are a global phenomenon, and their rent-seeking strategies straddle borders”, says Richard Kozul-Wright.

Whether or not they amount to a trade war, recent rounds of tariff hikes will disrupt a trading system drawn increasingly around value chains, although trade growth in 2018 will likely be similar to that of 2017.

However, the consequences of any serious escalation could, through heightened uncertainty and reduced investment, bring more damaging consequences in the medium term, the report says. These could be particularly serious for countries already facing financial distress.

Moreover, because tariffs work by altering the profitability of firms in the tradeable sectors, they carry distributional consequences and affect demand in ways that require careful assessment. The report includes projections that highlight the possible risks and concludes that “after decades of experiencing the limits of ‘free trade’, it would be tragic to embrace the opposite excess – a trade-tariff war – rather than to consider what Governments could do, through global policy coordination, to avert the continuing deterioration of income distribution and employment that are at the root of most recent economic crises.”

The report says that hyperglobalization has not resulted in a win-win world. But neither a retreat to nostalgic nationalism nor doubling down on support for free trade provides the right response. In addition, free trade has shown itself to be an ideological fig leaf that has curtailed policy space for developing countries and cut away protections for working people and small businesses, even as it protects the rent-seeking proclivities of big firms.

In the real world, trade wars are a symptom of a degraded economic system and multilateral architecture, the report says, while the disease is a vicious circle of corporate political capture and rising inequality where money is used to gain political power and political power is used to make money.

“Old and new pressures are weighing down on multilateralism,” Mukhisa Kituyi said. “In our interdependent world, inward-looking solutions do not offer a way forward; the challenge is to find ways to make multilateralism work.”

To avoid repeating the mistakes of the 1930s, UNCTAD suggests returning to the Havana Charter, which was the initial attempt to establish a managed multilateral trading system. Doing so means taking on many new challenges – unfamiliar to the signatories of the Charter in 1948 – that require effective international cooperation.

At a minimum, it would prioritize three actions: tie trade discussions to a commitment to full employment and rising wages, regulate predatory corporate behaviour and guarantee sufficient policy space to ensure that countries can manage their integration in line with the Sustainable Development Goals. 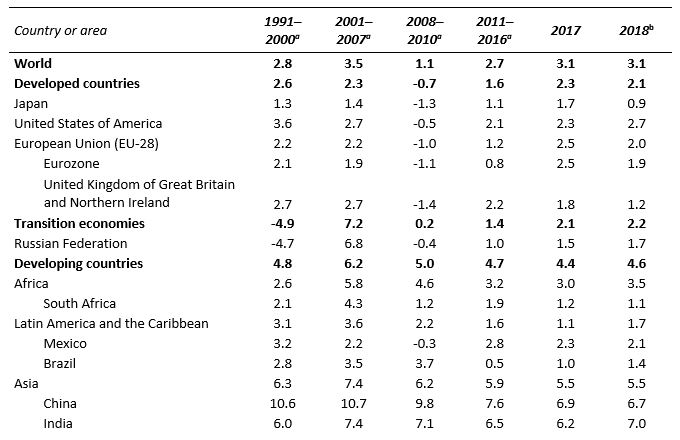 Source: UNCTAD calculations, based on data from the Trade and Development Report 2018. 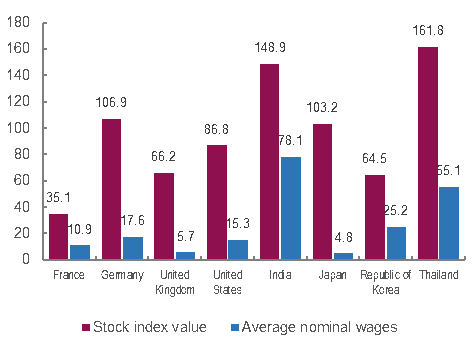 Source: Trade and Development Report 2018.
Note: The latest available data on nominal wages allow for comparisons only through 2015.

Figure 3: Growth rates of private corporate debt and private capital stock in (a) advanced economies
and (b) selected emerging markets, 2008–2015 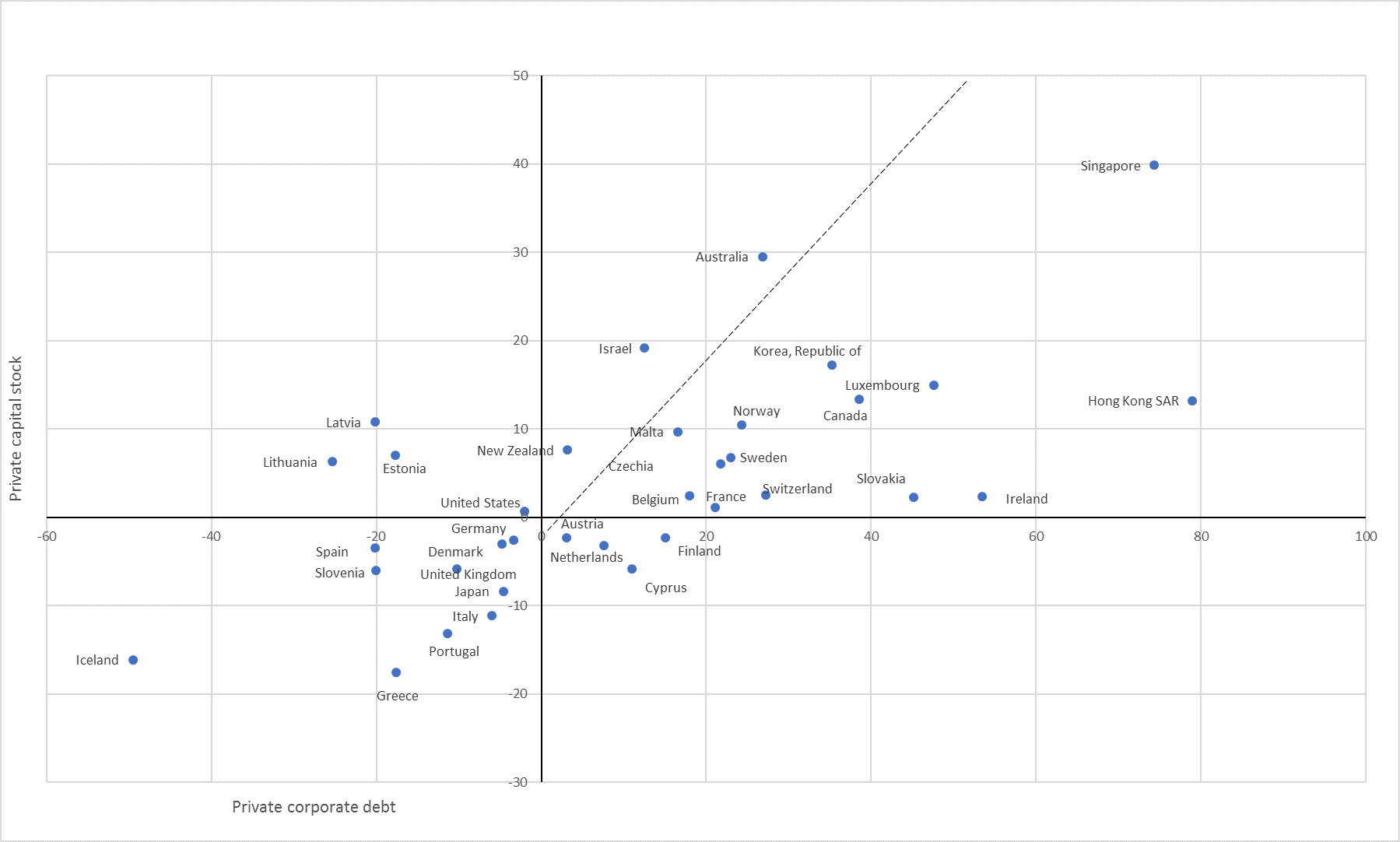 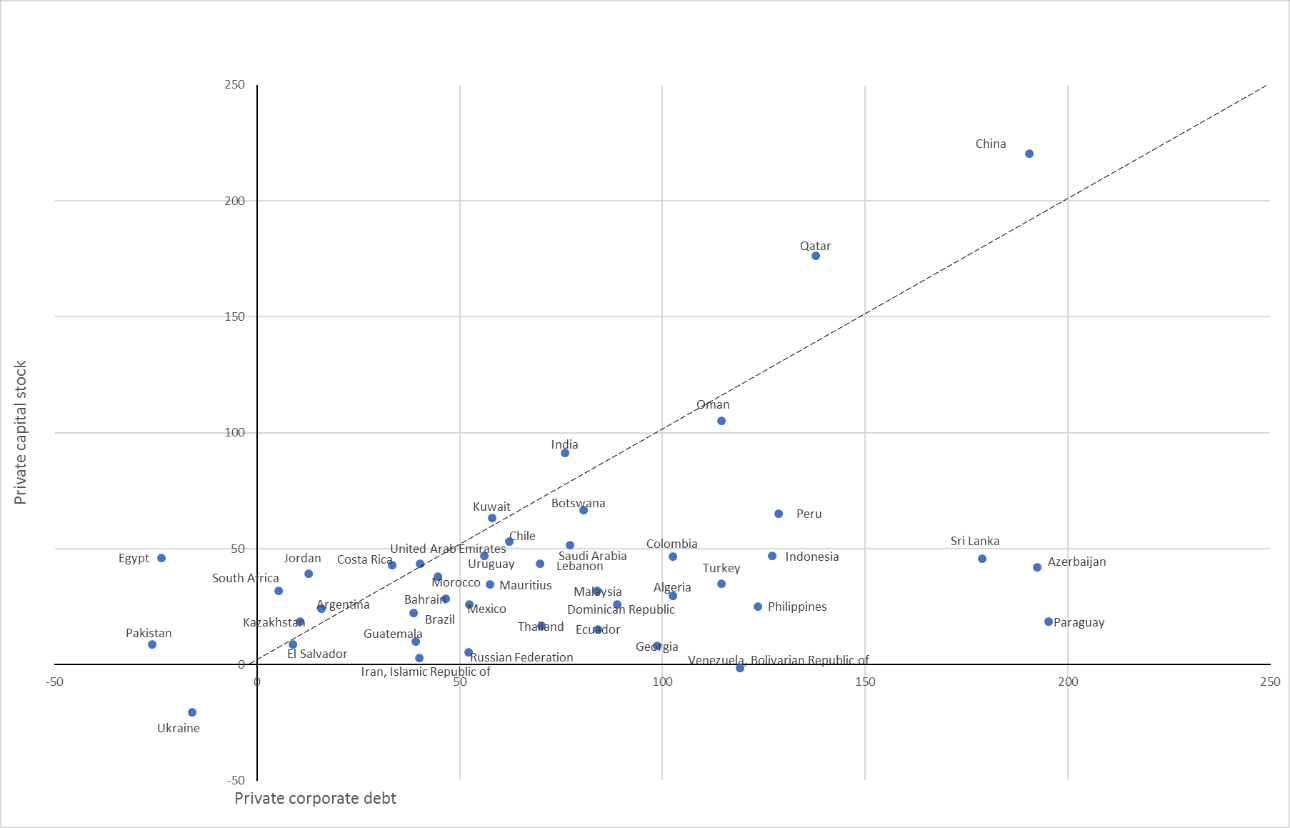 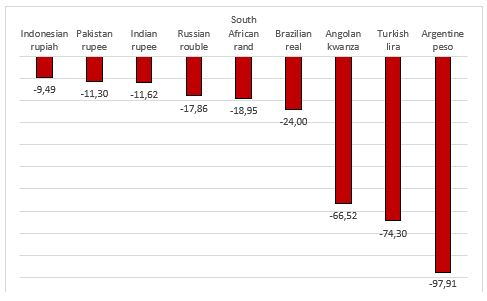 Source: UNCTAD calculations, based on data from the Trade and Development Report 2018.
Note: Data refer to spot nominal exchange rates, end of period.